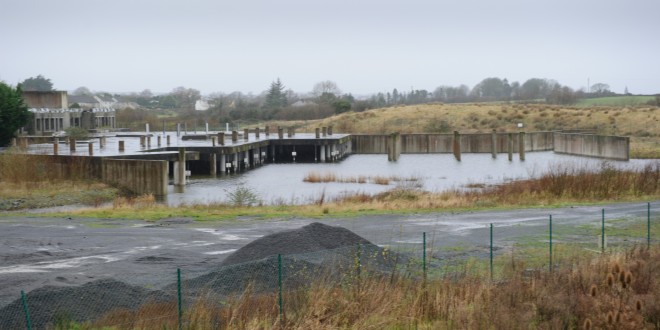 The derelict site in Clarecastle has become an eyesore and a health risk. Photograph by John Kelly.

Clare County Council has formally asked Grant Thornton, the receivers of the unfinished development at Cois Fhorgais in Clarecastle village, to furnish their plans for the site. The development, which is known locally as Devine’s Field, has been in a state of disrepair for several years.

Local Fine Gael Deputy Joe Carey has been advised by the council’s planning department that they recently carried out an inspection of the unfinished development at Cois Fhorgais, Clarecastle and had written to the receivers, Grant Thornton, with reference to the long-term resolution of the site and current issues therein which require immediate attention.

“As you are aware, the above site is listed on the Register of Unfinished Housing Developments and it is noted that little or no recent works have been carried out on the site to rectify the situation. There is currently a live extension of planning permission on the site, which will expire in April 2016. Consequently, the planning authority has requested the submission of a definitive Site Resolution Plan, with substantial proposals to either complete the project within the given timeframe or return it to greenfield site. A response from the receivers is awaited,” Clare County Council explained.

“The site presents a huge issue in terms of public safety and from a visual point of view, as it’s on the entrance to the village. For the past number of years, this development site has been abandoned and it really takes from future development plans and enhancement works. The development has no hope of progressing further and poses a serious health hazard and eyesore to the community of Clarecastle. It’s the strong desire of the local community that this site would be returned to a green-field area,” he pointed out.