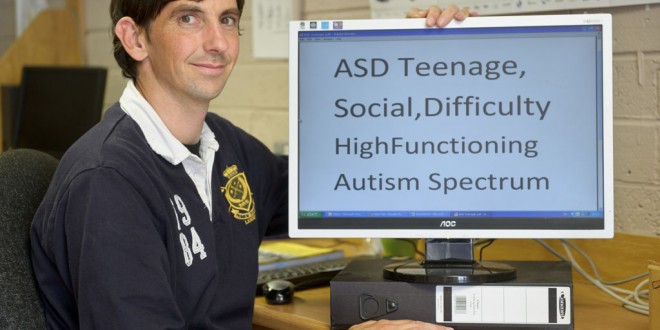 Eoin Mc Inerney, Youth Worker with DPOC, who is embarking on a pilot project on Aspergers, the first of its kind. Photograph by John Kelly.

Pioneering project for teenagers with Aspergers

THE first Irish social inclusion skills programme, to assist over 30 Clare teenagers with Aspergers, will be pioneered by a local disability advocacy group next month.

The Disabled People of Clare will run a 15-week programme based on the acclaimed PEERS project.

This innovative programme will provide a step-by-step coaching/mentoring approach to helping young adults with Autism Spectrum Disorder (ASD) and similar challenges to develop positive social skills and relationships within family, community, educational and employment situations.
The project will be a collaborative initiative involving members of the School Age Disability Team from Clare Early Intervention Services (CEIS) and DPOC representatives. The HSE Disability Team will provide a psychologist and a social worker to help run the project.

DPOC is delighted to be able to work in partnership with the intervention team to produce what is expected to be pioneering quantitative information on how to address social skills deficits for teenagers with high-functioning ASD.

If this programme meets initial expectations, it can be rolled out to other parts of the country. The closing date for applications is Friday, October 17 before its starts on Thursday, November 6.

The main focus of the project is to focus on the ability and not the disability of the participants.

Some people with Aspergers cannot cognitively understand what is going on in social situations. Falling between two stools, their needs are not deemed to be acute enough to require full-time support but they still lack the social skills that are needed in mainstream society.

It will target, but isn’t limited to, the 16 to 18 age group from Junior to Leaving Certificate level or those who may be struggling having already started college.

A need was identified for interaction for teenagers with Aspergers and ASD diagnoses as there is nothing out there for them. It was all new to the DPOC and to Ennis youth worker, Eoin McInerney, from his previous youth work experience.

“People with high functioning Aspergers may do very well in college but when it comes to transferring that into a workplace, they are falling by the wayside. Some statistics suggest there is a 90% unemployment rate for people with Aspergers who have above average intelligence,” he said.
Mr McInerney, who now works for the DPOC, believes the programme will help young adults to reach their full potential by addressing their social skills deficit.

“We may not be able to get them to cognitively understand every social situation. That isn’t the intention of the project. The purpose of the project is to provide support for teenagers with Aspergers and family members to help them to integrate better into society and pick up on social norms.
“It will help people with Aspergers to understand what are the norms, what is unacceptable and what people react to,” he explained.

An evidence-based approach with PEERS, as conducted through research at the UCLA Semel Institute for Neuroscience and Human Behaviour in Los Angeles, concluded a number of improvements in social functioning through participation in the programme. These included improved overall social skills in co-operation, assertion and responsibility; decreased problematic social behaviours; improved social communication, as well as decreased loneliness, improved empathy and knowledge of young adult social skills.

DPOC chairperson, Margaret Kinnane explained people with Aspergers may not be able to read a person’s body language, nuances or sarcasm.
While people with Aseprgers are categorised as having capacity issues, Ms Kinnane doesn’t believe this is very appropriate, as many are high achievers, having qualified with degrees and masters.

“There are a lot of adults with Aspergers who have degrees but are living at home with their parents because there isn’t the financial backing or they don’t fit into the category for support from the Brothers of Charity’s supported housing,” she said.

If these adults had the correct support and intervention in their teenage years, Mr McInerney believes they could be making a contribution in a workplace they enjoy and living independently.

Ms Kinnane said the first drawings and diaries of Albert Einstein for a helicopter and submarine were left in a museum and it took another person with dyslexia, who understood the sketches, to make sense of what was wrongly presumed to be a special code.

It is hoped that this project will provide valuable information and lay the groundwork for other programmes to assist those with Attention Deficit and Hyperactivity Disorder.

A letter seeking expressions of interest has been already circulated to all secondary schools in the county. The project will also liaise with groups who work with people with disabilities who are in third level education at a later stage and companies looking for the specialist skillset that people with autism have for certain work environments. There is a tendency to thrive in working with computers and information technology, while there are also job opportunities for accounting, stock-taking or quantity surveying.

When the project is completed, a decision may be taken to run a parents’ group, where the parent would be taught to become the social peer for their teenager with ASD.