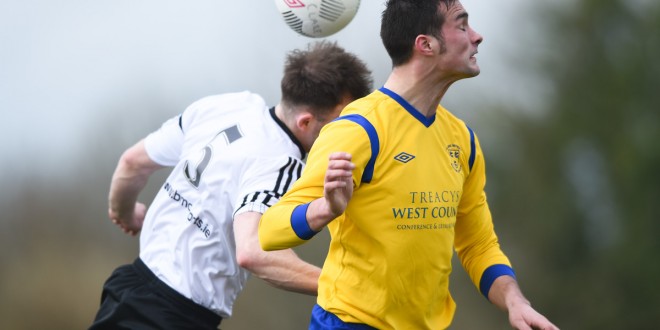 Newmarket Celtic’s dream of a first ever FAI junior cup title was shattered by Pike Rovers at the Limerick clubs grounds this afternoon when they lost out by the odd goal in five to the home team.

Adding to the disappointment is the fact that Newmarket enjoyed the better of matters for long spells but they will be disappointed with the manner in which they conceded all three goals.

The fact that Pike Rovers goalkeeper Gary Neville was named as the man of the match indicates that the Clare side created a lot of chances but they found Neville to be in sparkling form.

Two goals down early in the second half, Newmarket faced an uphill battle but, as they have done all year, they refused to give up and two Stephen Kelly goals saw them force extra time.

Pike went back in front early in the first period of extra time but while Newmarket had the better of matters after this to the final whistle, they just could not get through for another equaliser. They had claims for a penalty waved away by Tipperary referee John Hadnett who, in the last minute of normal time ordered Pike Rovers manager Mick Shields from the enclosure.

Newmarket had the first goal chance of the day but Dave McCarthy’s effort, following good work by Eoin Hayes and David Reidy, was cleared off the goal line with Neville beaten. Eoin Hayes and Stephen Kelly both came close to getting the opening goal before, against the run of play, Pike Rovers struck and Colin Daly finished after aneoin Hanrahan cross.

The second half was just two minutes old when Pike struck for their second, Colin Daly again applying the finish.

A minute later Newmarket almost pulled one back but Stephen Kelly’s header was just wide of the target. Kelly did hit the target fifteen minutes into this half when his header beat the home side’s defence.

Newmarket continued to pile on the pressure and two minutes from the end of normal time Dave McCarthy’s volley was just inches over the top. In the final minute of normal time and just as the fourth official signalled that there would be four minutes of added time, Kelly managed to head a Dave McCarthy delivery from a free to the corner of the net to the delight of the big Clare following.

Newmarket almost snatched the lead two minutes later but Neville saved well from Ian Collins who was put through by David Reidy.

For extra time Pike Rovers introduced Cian Power for Darragh Carroll and he s truck for what proved to be the winning goal in the third minute of the first period.

Newmarket laid siege to the Pike goal from here to the full time whistle but Neville produced excellent saves from Paddy Purcell and Stephen Kelly as they held on for victory and a place in the final against north end from Wexford who defeated St. Michaels from Tipperary in the other semi-final on Saturday evening.