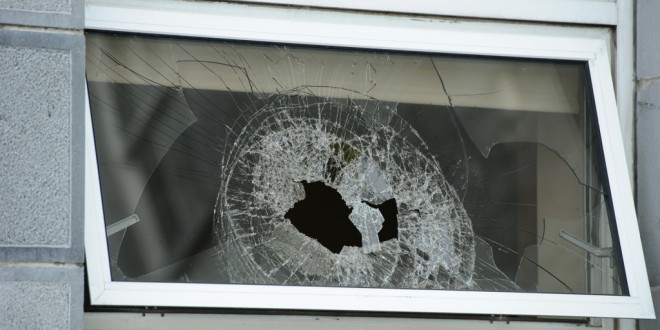 A view of the broken window at Ennis Courthouse. Photograph by John Kelly

Petrol Bomb Assault is Attack on County’s Centre of Justice

Gardai are treating a petrol bomb assault at Ennis Court House as an attack on the county’s centre of justice and on one of its most iconic historical buildings.

Scenes of crime gardaí have just concluded a forensic examination at the court house after a petrol bomb was thrown through a window of the Family Law Court room shortly before 4am on Thursday morning.

The culprit targeted a ground floor window of court room number 3 to the rear of the court house, which is where family law matters are typically dealt with in Ennis.

Detective Inspector John Galvin is leading the investigation and said the petrol bomb was made using “some kind of glass device with accelerant in it and material”.

“Someone knew how to put it [the petrol bomb] together alright. It was someone who wanted to cause damage, how much they intended to do is hard to say, had it gone in the wrong direction it could have been quite serious,” he added.

“It was the family law court that was targeted. It was of malicious intent and we are looking at it from that point of view but no one will know until someone is in court and cooperates with us exactly why it was done, but it was done with malicious intent. The way I look at it is this is the centre of justice within the county but it is also a very historic and iconic building in the town as well and it goes back a long way and if anyone can help us with it no matter how small we would appreciate it,” he said.

Minor damage was caused to the exterior and interior of the building but there were some scorch marks to the court room. Detective Inspector Galvin said there was no damage to paperwork or property as such.
The scene was sealed off over night and scenes of crime were there early on Thursday morning and carried out a full forensic investigation of the area.

“There is CCTV and we’re going through that in conjunction with the town and local CCTV in the area. I’m around a long time now and I’ve never seen anything like it before,” Detective Inspector Galvin said.

“They would have to traverse a wall to get into grounds, the park runs behind them and the main road runs in front of them, so someone may know of someone who may have had a particular interest or said something about doing damage and we would be anxious to hear that,” he said.

Although it was the family law court that was targeted gardaí cannot say for certain this was the intended target as it is the only court room that is at ground level in the building. However they said that its use as a family law court would be known to anyone who would be going through the courts regularly.

Gardaí have concluded their on-site enquiries and the incident will not impact the current business at the court house. The attack happened at a time when regular court sittings are on vacation, and the next court due to take place in court room number three is not scheduled to take place until September 2. It is expected that the court room can be returned to regular function in a very short time frame.

In a statement issued to The Clare Champion, The Court Service of Ireland said, “damage to the building was localised, minimal, and superficial, largely being scorch marks and smoke stains. There will be no affect on court services or sittings”.

Carol Byrne is a reporter at The Clare Champion newspaper reporting on news in the East Clare area and the arts. She also covers the courts in County Clare and has received seven national awards for this coverage from the Law Society of Ireland and a National Lottery Local Ireland national media award for Best Community Story 2019. A Masters in Journalism graduate of NUI Galway, she also holds a Bachelor of Arts from the University of Limerick in Music and Media Studies, and a Higher Diploma in Irish Legal Studies. She began her career interning at The Limerick Leader and Clare FM, before taking up a full time post at The Clare Champion in 2006.
@@Carlsburn
Previous SFA sets out priorities to minister
Next Careless parking in Doolin puts lives at risk