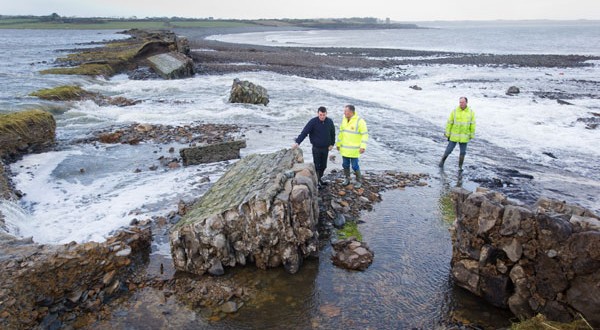 Farmers Matthew Carmody and Vincent Hedderman of Rahona, Carrigaholt together with fellow farmer Stephen Rowan of Kilcredaun examine the major breach to the "College Wall" near the Irish College. They all have farm land cut off by flooding at Kilcredaun, where the townland itself, where Stephen lives, is now effectively an island. Photograph by John Kelly.

FOUR families in Kilcredaun, Carrigaholt were marooned last weekend when high tide hit the picturesque townland, which is home to a historic lighthouse. The flooding resulted in the townland being rendered effectively an island from last Friday to Monday.

A total of six houses were cut off by the flooding. The grounds of the nearby O’Curry’s Irish College were also adversely affected by flooding, following the breaching of the nearby sea wall.

A number of houses in Carrigaholt village were also flooded when the village sea wall was breached at high tide, while the approach wall to the village, at the bottom of Moyarta Hill, was also damaged. The entry road to the village was completely impassable at the height of the tides.

Geoff Magee, who along with his wife, Sue, runs Dolphin Watch in Carrigaholt, was one of the Kilcredaun residents who found themselves living on a temporary island. He underlined the urgency of repairing the damaged sea wall, which straddles O’Curry’s Irish College in Kilcredaun.

“The roads could be flooded at any time of year because a spring tide happens with the new moon and the full moon every month. It’s not just winter time that we’ll be vulnerable if we don’t have a sea wall,” Mr Magee predicted.

“The Irish College has been there 100 years and is part of the fabric of the village. The old hall that was built in 1911 or 1912 was flooded but the rest of it is just about above sea level,” he added.

“The council is trying to get in there to clear the old culvert where the main drain would drain the land on the college beach, which is great.

“The damage in Carrigaholt, Kilcredaun, Kilbaha and the road around Ross has been very dramatic but it was very heartening to see the council trying to get a grip of it,” Mr Magee pointed out.

“That’s the worst I ever saw in my life and I’ve been at sea for 35 years. I think it’s something like Hurricane Debbie in the 1950s. Fortunately, nobody was hurt and there was no boat damage either, which was a miracle. There was good community bonding, which can’t be underestimated either. You see who your friends are. Everyone pitches in. I’ve been hiking out of Kilcredaun in the early hours to go down and manage a hellish scene that I have never witnessed back here before. I was trying to manage my boat and make sure that she didn’t get wrecked,” he said.

Carrigaholt postmaster Pat Gavin also lives in Kilcredaun. The village post office was closed last Friday and only reopened on Tuesday.
“I came out on a tractor this morning [Tuesday], although the tractor road has deteriorated a lot over a period of time. We were marooned since Thursday night. I got into the car on Friday morning and ran into a wall of water,” he recalled.

He felt Clare County Council reacted proactively to help those stricken in Carrigaholt and further west.
“The council has done everything they can. They were here Friday and had the machinery to remove the rocks off the streets. They also had the diggers for the banks of seaweed that were banked up. There have men here today cleaning and sweeping,” he noted appreciatively.

Meanwhile, Carrigaholt man Mark Carmody told The Clare Champion that a large tract of land has also been flooded.
“There’s approximately 200 to 300 acres of agricultural land flooded as well. There’s about eight local farmers affected,” he explained, adding that a meeting was held in Carmody’s public house on Sunday night to address flooding concerns.

“All the stakeholders, primarily the local residents, along with the board of the Irish College and the landowners met in Carmody’s and discussed a plan of action to try and highlight the fact that the sea wall was damaged and to try and get action on that,” Mr Carmody explained.

West Clare native Peter O'Connell has worked for The Clare Champion for 12 years and covers everything from sport, especially GAA, news, features and has been even known to branch into the fashion scene on occasion.
@@westclarepage
Previous Feakle woman is Ireland’s oldest ever
Next Ladies board to appeal Browne decision