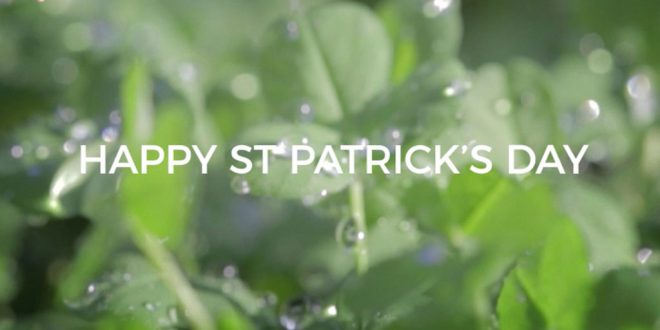 Tourism Ireland has unveiled a new online film for St Patrick’s Day 2017, to encourage prospective holidaymakers to come and visit Ireland this year.

The 60-second film includes wonderful footage shot around Ireland, including the Cliffs of Moher, interwoven with some great images from Tourism Ireland’s Global Greening initiative, which sees hundreds of famous landmarks and iconic sites across the globe illuminated in green each year to celebrate St Patrick’s Day on this Friday.

Last month, Tourism Ireland announced details of some of the famous attractions and sites around the world which will join its Global Greening initiative this year to mark St Patrick’s Day. From Rome to Rio and from London to Las Vegas, a host of major landmarks and iconic sites around the world will be illuminated in green this week – including the Colosseum, the Leaning Tower of Pisa, the London Eye, the Great Wall of China, the Christ the Redeemer statue in Rio de Janeiro, One World Trade Center in New York, Niagara Falls, the Chain Bridge in Budapest and Matsue Castle in Japan.

Journalists representing top media outlets from around the globe will visit Ireland this week taking in the Dublin St Patrick’s Day parade during their time here. Among the partipants in the parade in the capital will be a 100-strong group from Russia, who are staying at the Trump International Golf Links and Hotel in Doonbeg.