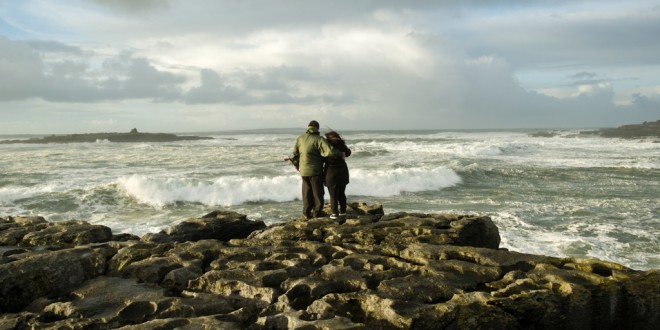 A couple watch the stormy seas brewing up at Doolin pier. Photograph by John Kelly.

MINISTER of State Jan O’Sullivan said she has this week signed the foreshore license, which clears the way for the signing of the contract for a new pier at Doolin.

Labour TD Michael McNamara described this as very good news and said he hopes the contract for the €5.2 million pier will be signed shortly.

“It is expected that the project will take about a year to complete and I hope the new commercial pier will be operational during the 2015 summer season. This is a major development for Doolin and will greatly improve connectivity with the Aran Islands. The contract provides for a new pier, new access road and sea dredging which will allow access to the pier at all times and eliminate the need to use smaller boats to transfer passengers when ferries cannot reach the existing pier.

“I had extensive discussions last summer with the Minister for Public Expenditure and Reform, Brendan Howlin, to ensure funding for this important infrastructural investment in North Clare and am very glad that work is finally ready to start,” Deputy McNamara said.