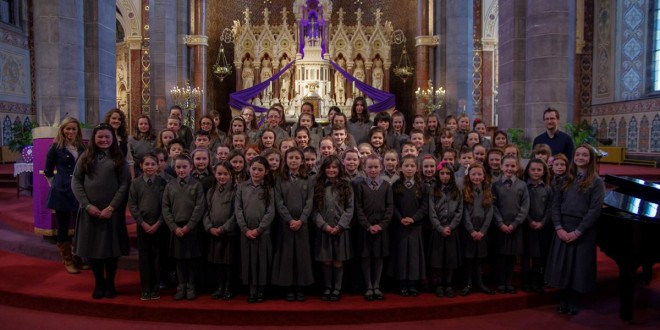 The competition, part of the Limerick City of Culture Year, was held in the Redemptorist Church, South Circular Road and 12 choirs competed before an appreciative audience made up mostly of parents and friends.

Announcing the results, the adjudicator, Dr Marion Doherty Hayden, formerly head of music, St Partick’s, Drumcondra, described the winners’ performance as “very polished, a lovely balance, the long notes were magical and the diction was excellent”.

The second adjudicator was Mr Kevin O Carroll from Waterford, a freelance musician and teacher.

Parteen choir also won the adjudicators’ award at the end of the festival.

Fr Tom Carroll, PP Parteen-Meelick said, “The school down the years has had a strong tradition of music and its great to see the present generation of teachers and pupils carrying on that proud tradition”.

Choir conductor and teacher, Olivia Parkinson said, “It was a great achievement for the pupils, as it can be quite difficult for children of this age to concentrate for an hour of practice and keep musical discipline.

“We were working at it for several months beforehand practising once a week. The standard overall at the competition was very good.”

The actingschool principal, Mairead Guckian said, “Music plays an important part in the school curriculum. We are very proud of our choir and to win this high quality competition two years running was a tremendous boost to the morale of all the staff and pupils.

“It should be remembered its all about taking part and all the choirs who entered were winners as they also spent hours practising their competition pieces.”

Teacher, Leah O Keeffe said the choir’s efforts were very much appreciated by the school and their parents.

The winning pieces performed by the choir were Spirit Train by Patti Drennan and I Am But A Small Voice by Roger Whittaker.

When the choir arrived back to school, they were greeted at the school gates by the staff and pupils with a congratulations banner.

A new principal, Gerard Ruane, who is attached to Scarriff National School, is replacing the very popular Philip Lavin who retired recently – the same day the Liam McCarthy Cup came to the school.