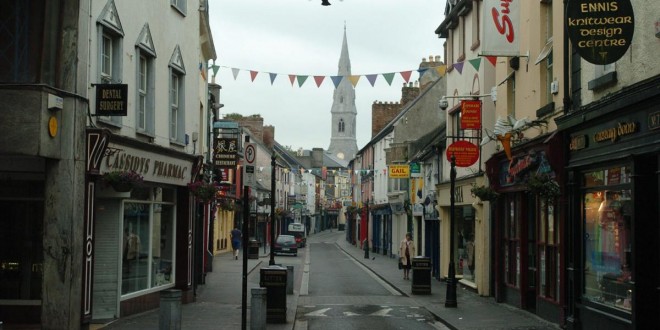 O’CONNELL Street is set to be transformed in the coming weeks with plans for the introduction of a ‘parklet’ unveiled by the local authority. A parklet is an extension to the footpath offering seating and amenities. The measure has already proven popular in other parts of the country as part of efforts to support social distancing. CEO of Ennis Chamber Margaret O’Brien, reacting to the initiative, commented, “I’m looking forward to seeing how it will work.”
Clare County Council have announced the move on a pilot basis from early August, however if successful the initiative may be rolled out to other parts of the county capital.
Ms O’Brien commented, “Clare County Council’s idea for a parklet is something which seems to have worked in other towns and cities around the country. It’s a concept that started in the States and has also been popular in England. The parklet will be introduced on O’Connell Street with street furniture and a deck which will be level with the footpath, with space for planting. It aims to be a place for people to pause and for shoppers to take a rest. It will be interesting to see how it works in Ennis. It’s worth a try and everything is worth a chance if we can make the town more attractive.”
The development of the parklet is part of an expansion of the Ennis Town Mobility Plan, which will also include the introduction of retractable bollards and directional signage.
Ms O’Brien stated that the bollards “will be a neat solution that will be a lot more attractive than the barriers that are currently being used and which people have quite rightly objected to as giving out the wrong signal.” She outlined that the new bollards will feature state-of-the-art technology to allow them to be retracted to facilitate deliveries to businesses.
She also welcomed the introduction of the signage, saying they have been on order for a number of weeks. “They will be able to help direct traffic off the periphery roads and bring people to the right points into town and for parking areas.”
Revealing the plans Clare County Council stated, “Following on from the initial implementation of the Mobility Plan, and the subsequent installation of click and collect spaces, priority parking spaces and additional planters, Clare County Council is delighted to announce new additional measures to improve the aesthetics and mobility of Ennis for its patrons and visitors.”
The new measures are the result of feedback from the public, “and aim to enhance all aspects of Ennis”.
The pedestrian barriers will be replaced by retractable bollards at: Abbey Street at the Francis Street Junction; Francis Street at Friary carpark junction; Salthouse Lane at the carpark end; Cabey’s Lane at the market; Bank Place at junction to Abbey Street carpark; and O’Connell Street before Station Road Cross.
“The retractable bollards will improve the aesthetics at the entrances to the town centre, enhancing the visitor experience and will also complement our wonderful features while keeping people safe during the Covid-19 pandemic.”
The directional signage will be erected on the inner ring route around the town commencing in early August.
“These signs will enable people to find specific areas of town and where parking is located. The aim is to entice people from outside our beautiful town to pop in for a visit and make their experience as pleasant as possible,” stated the council.
Announcing the parklet, the council explained, “A parklet is a sidewalk extension that provides more seating and amenities for people using the street. Usually parklets are installed in carparking bays. Parklets offer a place to stop, to sit, and to rest while taking in the activities of the street. Our parklet is expected to be delivered in early August. If the pilot parklet is successful, additional parklets may be procured.”