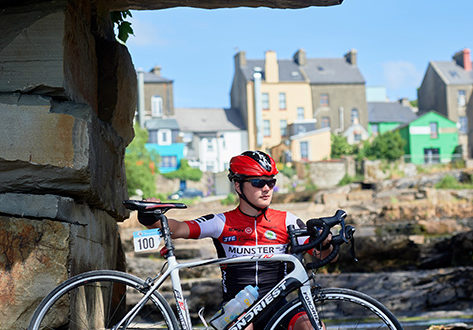 15 year old cyclist Matt Griffin of Ennistymon who was chosen to be on the Munster team, and also the Irish team which was due to travel to Australia. Photograph by John Kelly

August was to have been a memorable month for young Matt Griffin. The 15 year-old Ennistymon teenager was to have made his national bow at a major cycling event in Austria but the Covid-19 pandemic has put the brakes on that happening.

“It’s a pity. We were looking forward to the event and its very disappointing that the Austrian cycling event has been cancelled. I suppose health comes first in situations like that,” concedes his father, Matthew.

The youngster’s metoric rise in cycling circles is driven by desire and a dedication which sees him make a 220 round trip to Kanturk in North Cork for training spins with the local youth cycling club. But distance is no barrier as his father Matthew fulfils the taxi driver role, ferrying him to and from the training sessions.

Before the pandemic brought travel to a halt, Matt would make the trip a couple of time each week.

“He can be a bit lazy but when he’s out and gets going he’s great,” quips Matthew.

“Kanturk is about a 220km round trip from Ennistymon. When he gets down there he might have a 100km training spin ahead of him. Then he’ll sit in the car and face the trip back home. It’s a fair commitment but it’s no bother either,” Matthew stresses.

The youth cycling club in Kanturk is noted for churning out talented cyclists, the most recent being Eddie Dunbar who now rides with Team INEOS and placed third in Stage 12 of last year’s Grio d’Italia.

“There’s no youth cycling club in Clare or Limerick so he has to travel to Cork. That’s where all the good youth cyclists go. They’re coming from all over, that’s where Eddie Dunbar started out.

“Its a fair distance to travel for training. Normally Matt would come home after training, but if there’s a weekend training session he’d stay below. He’s friendly with some of the lads down there. Other than that his father brings him up and down,” Matthew, one of the founding members of the Riverside Cycling Club in Ennistymon, adds.

“Normally you’d have competitive events every second or third weekend but like everything else they’ve been cancelled because of the virus. Everything is up in the air at the moment. The focus though is on the Irish national championship planned for September. We’re hoping it will still go ahead,” Matthew points out.

A junior cert student at Ennistymon Vocation School, Matt made the Irish squad for Austria on the strength of a second place finish at the Munster trials back at the start of the year.

“There were just under 30 cyclists in the Munster trial. There was to have been an Irish trail following that but the storms put an end to that. I don’t know whether it was to his advantage or disadvantage that the Irish trial was cancelled. He automatically qualified for the 12-man Irish squad because of his second place finish in Munster.

“It was his first time ever making an Irish squad and next year he’ll be overage and will have to compete in junior. It’s a pity but if he sticks at it, you’d never know what’s around the corner,” he says.

Matthew claims credit for introducing Matt to the sport.

“His ould lad introduced him to cycling. I got too old to play rugby, then I went off the beer and I had to do something so I went cycling.

“I would take him with me to Ballyvaughan when I was a member of the Burren Cycling Club but then a few of us formed the club in Ennistymon. Matt enjoys the cycling and its competitive. We will just have to wait and see where it takes him,” his dad points out.