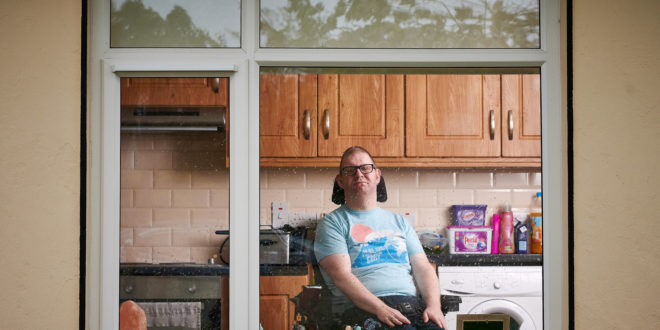 Padraig Hayes at home in Shannon. Photograph by John Kelly

THE lockdown has brought challenges for everyone but there is no doubt that it is much more difficult for some people than for others.

A wheelchair user who lives alone in Shannon, Pádraic Hayes is in a vulnerable category, with underlying conditions including cerebral palsy, arthritis and diabetes.

When one hears about the difficulties that teenagers have in not going out or grandparents in not holding small children, Pádraic’s situation puts things into a greater context. “It’s ok, I’ve been confined to the house. I normally attend the Dulick centre in Ennis and I miss that. I’m also heavily involved with the Irish Wheelchair Association and I’m getting a lot of support from the two of them.”

He says that he gets dinners delivered from the Dulick centre and they call him also, while the Irish Wheelchair Associations deliver packs with things like word-searches, quizzes and puzzles to keep his spirits up.These days he rarely leaves the house, with his sister coming by to deliver his shopping.

The pandemic has dominated life for months now and Pádraic says that while he found it very hard at the beginning, he has adjusted now. “I found it lonely at the start and it was hard to cope. I’m grateful to the Day Hospital in Shannon, they’d ring me twice a week and it is helpful.

“I’m ok, I’m getting back to myself and I’m more comfortable in the house now. At the start, it was lonely and I wasn’t comfortable. It’s tough to deal with all of this on your own.”

He says he enjoys the supports from the Irish Wheelchair Association during more regular times, while he has been going to the Dulick Centre since August of last year. “I’d do different classes and I enjoy it, You meet people there. It’s very good to get out of the house.”

Even when the worst passes, he realises that things will be greatly different than they have been. “There are going to be big changes if the Dulick or the IWA reopen. We’d have to socially distance, we wouldn’t be able to be in the big groups that we were used to. “That’s going to be the future until they come up with a vaccine.”

Owen Ryan has been a journalist with the Clare Champion since 2007, having previously worked for a number of other regional titles in Limerick, Galway and Cork.
Previous Féile Brían Ború called off as Covid-19 restrictions continue
Next Lockdown call rise for Samaritans