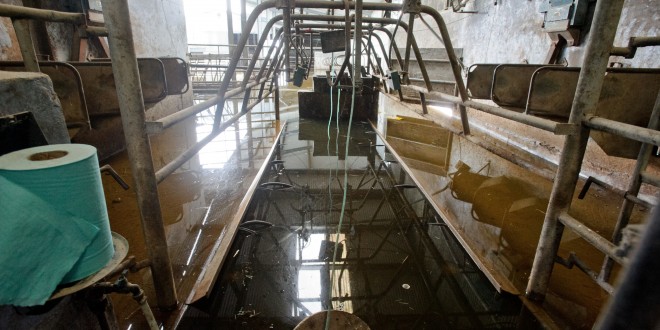 ‘Our life’s work is gone and nobody cares’

A SOUTH Galway man, whose farmyard and milking parlour are under water, has described the “terrible mental strain” he feels from the loss of his livelihood and his efforts to keep his herd of 95 cows alive.

“Two days after Christmas, the water came into the yard. It was like the tide coming in on top of us,” Micheál Flaherty recalled.

“I don’t know what I will do, to be honest,” the Tierneevin dairy farmer admitted, “because the parlour will cost a lot of money. We will have to rewire it completely. It is all under water. It will take months for the water to even go away. If it stopped rising today, it would still take three months for the water to recede. That is my income. I have nothing else. All our life’s work is gone and nobody cares.

“I genuinely thought we could keep the water out. I had two good pumps from the council. It came in on a wave and I was afraid the slats would lift. That would have been an absolute disaster because the cows would have jumped in one after the other. Even as it was, they were very frightened when we were taking them out because they were walking on water,” he went on.

Micheál is exhausted, angry, worried and hurt. His milking parlour is under several feet of water and will take months to repair, work that cannot be started until the water recedes. Even if he could use the parlour, he has also had to ‘dry off’ his herd, a move that would greatly decrease milk production in the next lactation.
Despite the huge financial impact this will have on Micheál and his family, his primary concern is the welfare of his cows. “I can’t even sleep. They are gone from lying on mats to being out on winterage. I have to have them in different places because if you put them all together, it is very hard to feed them. Even trying to give them meal is a hard job. As soon as they see the meal, they could run at you because they are hungry,” he explained.

“They are Holsteins. They are the worst type to put out into the bad weather. They are not able for any hardship. They were very comfortable where they were. I’m just trying to keep them fed and warm and that alone would break your heart to see them the way they are,” Micheál said.

“I can’t get into the silage pit because I’d ruin the tractor. The water is too deep. The two wheels of the tractor are submerged and it would ruin the bearings. At its deepest in the yard, the water is about 6ft. I have the sandbags up and they are about 4ft but the water was coming in over them so I had to put other ones on top of them,” he added.

Micheál has worked the family farm for 19 years and his parents did it before that. He has invested heavily in new equipment and infrastructure, much of which is destroyed.

“The insurance wouldn’t cover us because it is a flooded area. The awful thing about it is nobody really cares. They don’t care. Those people in authority are sitting down in their offices and it doesn’t bother them because it doesn’t affect them. They say it is hard luck on you and then forget about it because it isn’t happening to them,” he said.

“This is unreal; the water is 5ft higher than we ever had it,” Micheál estimated and he blames remedial works in other areas.

“On Christmas Day – the rain we got – that was the day that did the damage. It never stopped all day. I couldn’t believe it. There was such a swell of water everywhere that it had no place to go and it drained into the pocket where we are. It is coming from Coole and Corofin and it is all coming down here and depending on underground rivers and swallow holes to take it,” he said.

“When the flood relief work was done on Gort town, that left us in an awful position. The water used to take about two weeks to get down here, now it takes two days,” he added.

“They were able to take the water out of the town. They spent thousands upon thousands on it. What are we doing to deserve this? They didn’t care where the water went. They just pumped it down on top of us and then had the cheek to say it was coming anyway,” he said.

Micheál’s future is uncertain but he wants to see a permanent solution to the flooding that has devastated his land and farmyard and blocked roads, greatly inconveniencing his friends and neighbours.

“It is a terrible mental strain because the flooding will not go away that soon. If you thought it would be gone in a week or two, it would be one thing but it will be months and it would literally drive you mad. It is hard to believe. Looking at it every day is awful.”

“If the OPW stayed away and just let local contractors do the work. The OPW take a few years to make up their mind and everything has to have reports and reports on the effects of the environment. If they just stood back from it. We are 25 years looking at this and I can’t see them doing anything about it. They just go at a snail’s pace,” he concluded.