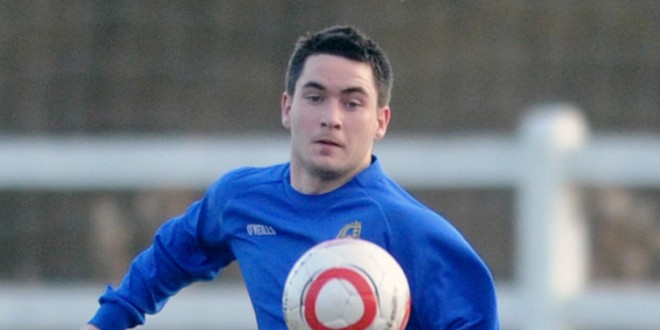 The decisive goal came in the final minute of normal time when Irish junior international Eoin Hayes applied the finish, Earlier he had seen his penalty attempt well saved by the visiting goalkeeper Lee Murphy.

A near galeforce wind blew directly down the field towards the goals at the road side of the grounds and this made things difficult for the players. Clare played with the aid of the wind in the opening half but visiting goalie Murphy got little to do.

Five minutes before half time he did produce an excellent save from Colin Ryan whose first time strike from the half way line saw Murphy dive full stretch to his right to keep the ball from crossing the goal line.

The game produced a number of talking points not least the issuing of yellow cards by match official Michael Rock to Eoin Hayes and AUL’s John Rock as early as the ninth minute. Visiting players and officials argued that the Clare man should have seen red after he clashed with Rock who, incidentally, is also an Irish junior international.

The talking points started before the game when it emerged that following a change of rule, officials for the fixture were to be provided by the home league. Clare pointed out that they had not been notified of the change and, as has been the case for the past number of years, they understood that officials from a neutral league would be taking charge..

The Clare league then appointed Michael Rock to take charge with Terry Kennedy and John Green as linesmen and all of this meant that the match was twenty minutes later kicking off.

With the wind to their backs in the second half, the visitors piled on the pressure but they simply could not find a way past Barry Ryan in the Clare goal. He produced two outstanding saves in the opening minutes of the second half. As the half wore on Clare took a grip on proceedings and their superior fitness was evident in the final quarter when they were also helped by the fact that the AUL were down to ten men after Anthony McKay picked up a second yellow which ended his involvement in the game with fifteen minutes to play.

At the mid point of the half referee Rock had no hesitation in pointing to the penalty spot when Dave McCarthy was fouled in the area but Eoin Hayes’ spot kick was well saved by Lee Murphy who, a short time earlier, had produced an impressive save from Tommy McKeown .

The win means that Clare will face Kilkenny in the semi-final, on a date to be confirmed and this game will also take place at Healy park in Doora.