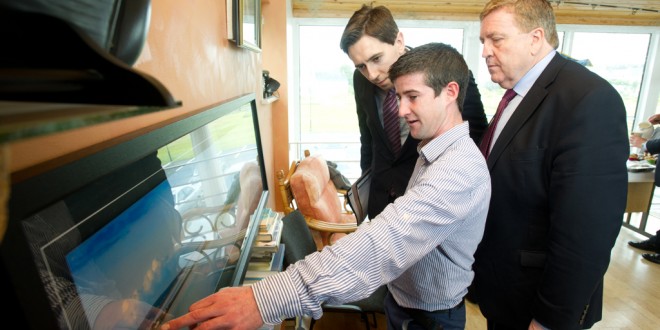 THE Minister of State with Special Responsibility for the Office of Public Works (OPW) has told The Clare Champion that separate minor work applications for farmers affected by flooding on the Fergus embankments and in Doonbeg will be dealt with, as quickly as possible, by his office. The maximum figure possible under each scheme is €500,000.

Deputy Simon Harris was speaking during a visit to Clare on Tuesday, when he met with a farming delegation in Kildysart and visited some of the land affected by serious flooding in 2014.

“I think they appreciate the frankness and the straight-forwardness of the procedure I have outlined to them. When I came to office and was made aware of these problems, the first thing I did was to bring all the people around the table together. Deputy Pat Breen has been on my case about this for quite a period of time,” he explained.

“On March 10, I brought the IFA Clare chairman, Andrew Dundas, a number of farmers from Clare, Oireachtas members and senior OPW officials together. At that meeting, we had a full and frank discussion on what we could and couldn’t do. There is a debate over who is legally responsible but that’s not going to help.

“The only way the OPW can put in funds is through the county council and that’s through the Minor Works Scheme. What we did on March 10 was we outlined very clearly a cost-benefit analysis, what could be included and what couldn’t be included. The IFA undertook at that meeting to work with Clare County Council to put in a new cost-benefit analysis, the most robust one they could,” Minister Harris explained, before noting that he is still waiting for one of the reports.

“I only received the first one on July 4 and the second one is due this week. Until we received them, no decision could be made and the farmers fully understand that. I have given a commitment to the farmers to try and turn around the applications as quickly as possible.

“I’m very conscious that, one way or the other, this needs to be brought to a conclusion. We approached this from the point of view of wanting to help. We wouldn’t have brought them together on March 10 if we didn’t want to help. But I also have to be bound by the rules and now that we have the cost-benefit analysis back, and I hope it’s robust, that will be examined as quickly as possible and a decision will be made. So that’s where it currently lies.

“I had an opportunity to view, first-hand, the embankments and physically see some of the problems and talk to the farmers. I’ll be feeding those comments back to the OPW,” the Wicklow Fine Gael TD stated.

Meanwhile, Deputy Pat Breen is confident that progress will be made, given that Minister Harris saw first-hand the issues caused by flooding.

“The maximum you can draw on each of the applications is €500,000. I think the council have put in a figure under that figure for each project. So we have to wait and see how much money is going to be granted here.
“I can’t say for certain but I would hope that some funding would be granted to alleviate the hardship on farmers as a result of the winter storms in 2014,” Deputy Breen said.

“The minister saw for himself the breaches in the embankments. We were there during high tide, so he saw the land that was flooded. There was 50 acres flooded at the time. He was accompanied by engineers from the OPW. who are the people who will be looking at the cost-benefit analysis. I would expect that something would happen in relation to that, within four to six weeks,” the Ballynacally TD calculated.

He underlined the need for expediency with regard to the work and finance required.

“It’s crucial for farmers in the area that these works be carried out before the winter. This is a scheme that is allocated by the council, so any funding that would be allocated would be done so through Clare County Council and the scheme would be tendered to local contractors, to carry out the works. I would hope that the IFA have prepared a very comprehensive document,” Deputy Breen concluded.

“I would now urge the minister to make a decision on these applications as soon as possible. There is no point in funding being granted for these works late in November, when we are already in the middle of winter. Realistically, work has to be completed on these two sites by September. Time is of the essence here. Already the communities around Doonbeg, Ballynacally and Kildysart, along with the IFA, have shown huge resilience and determination in the face of ongoing bureaucracy to get the applications this far,” said the deputy, who highlighted the role of Clare IFA.

“I note from the extensive meetings I have had with the IFA locally and Clare County Council, the huge amount of work they have done to date. It is now time for the OPW to show their support for these West Clare communities and local farmers and grant these applications.

“The farming communities along the Shannon Estuary and the west coast of Clare have endured great financial and physical hardship since the high tides and storms of 2013 and 2014. The uncertainty for the future of their farms and incomes cannot continue for another winter, especially when two minor coastal protection works, estimated at €500,000 each, could solve the issue,” Deputy McNamara maintained.