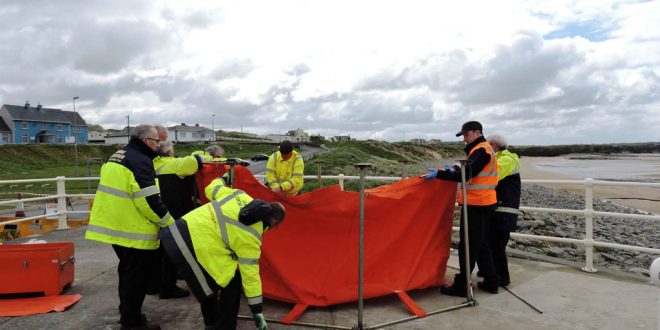 A team takiing part in the oil spillage exercise at Spanish Point.

A training exercise testing the response capabilities of Shannon Foynes Port Company, local authorities and other organisations who operate in the vicinity of the Shannon Estuary took place at Spanish Point this week.

The simulated event, which was hosted by Clare County Council on behalf of the Shannon Estuary Anti-Pollution Team (SEA-PT), centred on a major spillage of crude oil from an exploration platform located approximately 220km off the south west coast of Ireland with oil coming ashore at Spanish Point.

Other parameters for the exercise included notification that the source of the pollution had been brought under control and that there had been no casualties on the oil exploration platform.

There was a practical element on site at Spanish Point involving operation and demonstration of equipment while a technical briefing was be carried out on equipment on site for officials.

The second day of the event consisted of the management of a simulated large scale event for senior management of Local Authorities, SEA-PT members and the Coastguard in Clare County Council’s headquarters at Áras Contae an Chláir, Ennis, which acted as the Incident Command Centre.

An exercise dealing with an oil splillage was held off Spanish Point.
Previous Avenue United claim youths cup title
Next Kilkee losing out on conference boost