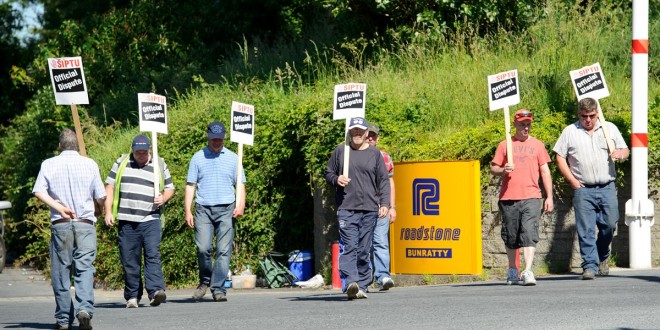 The picket line at Roadstone, Bunratty on ther first day of the dispute. Photograph by John Kelly

An official picket was placed  Roadstone, Bunratty quarry again on this Tuesday morning following the continuation of a nationwide strike against cuts to general operatives’ wages.

An official SIPTU picket was placed on the Roadstone Woods Limited in Bunratty plant on Monday by its employees, as part of a nationwide dispute affecting 20 of the firm’s locations across the country.

According to SIPTU, workers will lose almost €20,000 in their wages over the next five years if a new cost-cutting plan is introduced against the wishes of workers.

The union claims that the parent company, Cement Roadstone Holdings Limited are trying to implement unsustainable cost savings for Roadstone totalling €10 million over the next five years.

The company, which makes building materials for the construction sector, has been in talks with union officials in recent times. Both parties were also involved in a Labour Court recommendation that urged both sides to resume negotiations.

However, these negotiations broke down over the weekend.

Management at the Bunratty plant referred a request for a Clare Champion interview outside the plant on Tuesday morning to Roadstone Wood’s headquarters in Dublin, who in turn passed it on to a public relations company, Drury Communications.