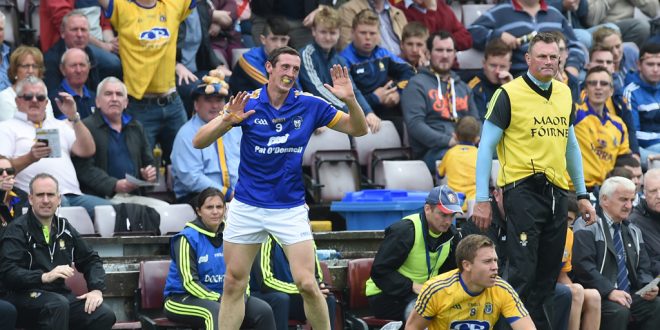 Cathal O'Connor of Clare gestures to the referee before being sent off during their All-Ireland qualifier against Roscommon in Pearse Stadium. Photograph by John Kelly

CLARE midfielder Cathal O’Connor is available to play in Sunday’s All-Ireland quarter-final game against Kerry at 2pm.
O’Connor travelled to Dublin on Wednesday, accompanied by Clare selector David O’Brien and GAA secretary Pat Fitzgerald, where they attended an appeal hearing at Croke Park in relation to his red card in Saturday’s round four qualifier win over Roscommon in Salthill.
The Coolmeen man was sent off shortly after half-time for what what referee Pádraig Hughes deemed ‘dangerous play’ in his match report.
Clare received a copy of the match report on Tuesday and immediately filed an appeal, which was heard by the Central Competitions Control Committee on Wednesday night. The appeal was successful.
This is a huge boost to Clare ahead of their biggest championship match in 24 years. They have not played championship football in Croke Park since the 1992 All-Ireland semi-final, when they were beaten by Dublin.