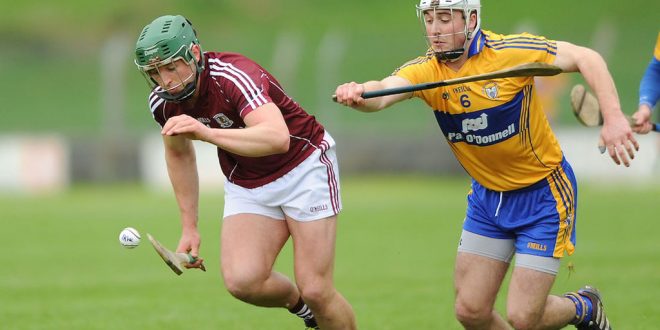 Patrick O'Connor in action against Galway. Photograph by John Kelly

TUBBER’S Pat O’Connor, who was recently appointed as the Clare senior hurling captain for 2017, is keeping his fingers crossed that he will manage some game time before Clare’s participation in the 2017 league ends.

Speaking to The Clare Champion this week, he paid tribute to the physios and medical team at Santry. “I am hoping to play some bit before the league ends but, realistically, getting up to the pace required, the time frame might be a bit too soon.”

He continued, “At this stage, I have little or no pain. I am back into full gym and I can swing a hurley. The next step is to get into contact. Realistically, I will be looking at the Clare Champion Cup to get back to sharpness.”

The All-Ireland medal winner from 2013 said being appointed Clare captain is a “massive honour”.
“I was nearly the last to find out, as I couldn’t make training that evening. It was a big shock when I did get the news and I just can’t wait to get into action and contribute.”

He said a “mixed bag” is an accurate description of Clare’s league campaign to date.

“That’s not just about us, it’s the competition as a whole. We will be concentrating on producing a good bit more of what we saw against Kilkenny and a lot less of what we saw in Cork. We have been focussing on training as hard as we can and bringing it all into a complete performance against Tipperary on Sunday.”

O’Connor said, “Tipperary are top of the pile at the moment. Every team is judged on their results and theirs have been exemplary. They are unbeaten since we beat them in the league quarter-final last year. They are a brilliant team and they look to be a couple of steps ahead of the rest at present. Sunday’s game presents a huge task for the lads but it’s something we have risen to before and we are looking to do it again. It’s a standard we like to set for ourselves.

“Clare have been asked a lot of questions to date this season, due to the absence of players because of injury, Ballyea’s progress to the All-Ireland final and the Fitzgibbon Cup. All of this has meant that numbers at training were down some nights but a couple of players have come in and grabbed the opportunity, while some of the older guys, who didn’t see much game time last year, are really chomping at the bit again. The squad is really focussed and all are working hard,” the captain continued.

“The league is a fantastic competition but as regards giving lads a chance, it’s hard for managements, as they are under so much pressure. You play two consecutive weeks, then there is a break for a week and then it’s three consecutive weeks. We can’t afford to be losing guys but you do get to see what lads are made of. It’s a high pressure situation.”

O’Connor agrees with the decision to bring the All-Ireland finals forward to August.

“It’s a great thing to be condensing the season a bit. It gives a bit more time for the players, while it allows clubs to play championship games at a better time of the year weather-wise. The first week in September holds great tradition for the hurling final but it’s not sustainable the way it is at the moment.”

O’Connor said he doesn’t mind what month the All-Ireland is played in, if Clare can manage to be involved.

“That’s a long way away and once the league is over, our focus will be on our meeting with Limerick. We can’t get too far ahead of ourselves and we will be aiming to be in peak condition for that game in June.”

Clare captain Patyrick O'Connor is hopeful that he will be fit to start a game before the NHL ends.
Previous Councillor seeks to protect defibrillators
Next Loop Head’s Fenians honoured