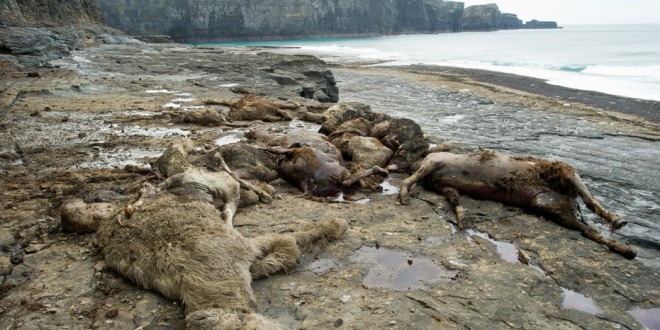 A view of the scene at Baltard, Doonbeg where a number of carcasses were discovered. Photograph by John Kelly

CLARE gardaí have enlisted the services of an oceanographer as part of a complex investigation into the alleged dumping of 17 carcasses at the base of the Baltard Cliffs near Doonbeg.

Chief Superintendent John Kerin confirmed the oceanographer was hired in an effort to establish whether or not the animals, which were discovered in April 2014 were washed in from the Atlantic Ocean.

Superintendent Kerin confirmed a substantial two-volume file on one of the most complex cases in West Clare in recent times had been lodged with the DPP since December. It is understood that a decision considering a direction in this case will be made in the near future.

An investigation is continuing involving the gardaí, the Department of Agriculture, Clare County Council and the ISPCA.

The expertise of the Department of Agriculture, concerning DNA examination of the dead animals, has been called on to establish if they matched any herd number in the department’s official records.
Up to 15 animals were located close together at the bottom of the isolated cliffs, while another dead horse lay close by.

Another horse lay within 200 yards of the edge at the top of the cliffs and had to be put down by a veterinary surgeon, who visited the scene.

At the time, Clare’s ISPCA warden Frankie Coote said, “I found nine horses, four cattle and three calves together at the bottom of the cliffs. Their ears had been cut off to remove the tags.

“This was planned. Whoever did it, it took quite a lot of work. Plus removing all identification from the animals made it sinister.”