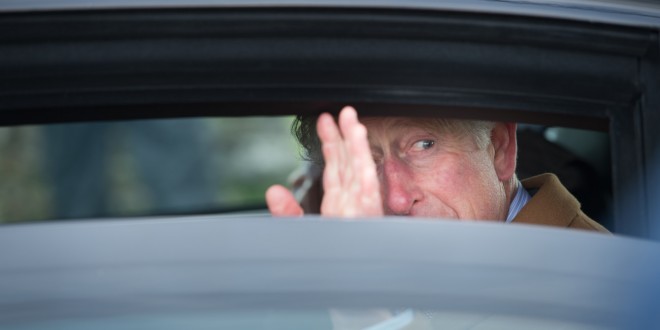 Charles Prince of Wales, waves goodbye following his visit to the Burren. Photograph by John Kelly.

A North Clare business woman was one of 150 guests invited to attend a reception in NUI Galway, honouring the first official joint visit of the Prince of Wales and his wife, the Duchess of Cornwall.
Birgitta Curtin described the event as “very special”, especially given that she witnessed the historic first meeting and handshake between Prince Charles and Sinn Féin president, Gerry Adams.
Deputy Adams described their handshake “as a symbol” of the progress that has been made since the Prince’s first visit to Ireland in 1995.
Birgitta described the atmosphere as “very relaxed” adding that she “didn’t know it was going to happen”.
“Of course then it dawned on me that this was extremely significant,” she recalled.
While the handshake and brief introduction, witnessed by Birgitta, lasted just 30 seconds, the pair later held a 10-minute private meeting.
Prince Charles, in his first speech of the couple’s four-day visit to both sides of the Irish border, told the assembled crowd of dignitaries and politicians that it was a “very great pleasure” to be in Galway and even started his remarks with “a dhaoine uaisle”, the Irish equivalent of “ladies and gentlemen”.
He said he was “overwhelmed and so deeply touched by the extraordinary kindness, the welcome, the enthusiasm, indeed the fun of being in Ireland. Apart from anything else, the chance of plenty of good jokes and laughter makes the whole visit a delight”.
The prince said Irish people have a wonderful spirit and that the country has a “unique magic” which makes it irresistible. He described the visit as “all too short” adding that he “always wanted to see” the Burren.
Prince Charles and the Duchess of Cornwall were greeted at the university by Tánaiste Joan Burton and Arts and Heritage Minister Heather Humphreys.
The Duchess was presented with a bouquet of English roses, before the royal couple were led into a marquee exhibiting the best of local arts, crafts and culture. After being introduced to exhibitors by Niall Gibbons, CEO of Tourism Ireland, Prince Charles and Camilla were immediately entertained by a troupe of Irish dancers. Also present were representatives of the Burren College of Art and Shannon Heritage.
The royal couple were also presented with a woollen blanket and, much to their own amusement, a willow-woven rattle “for the newborn” Princess Charlotte.
Basket weaver, Ciaran Hogan, who gave the rattle to the heir to the British throne, said it prompted a laugh from the royals and Prince Charles “gave it a rattle” to test it out.
Ms Curtin, who owns the Burren Smokehouse, said the visit and the positivity surrounding it, is extremely good for the area.
“For tourism, Prince Charles is really opening up a route for people to say it is safe to come to Ireland and the significance of himself and Gerry Adams’ meeting reinforces that we are in peace and reconciliation. It has not fully happened but it is happening.
“The fact he specifically wanted to come to the Burren and meet Burrenbeo representatives and Burren Life Farmers for Conservation, that is exactly what he is interested in. He is saying ‘this is the Burren, it is a special place’ and it reflects the tone of the Burren and Cliffs of Moher Geopark. Of all the places he visited, he visited NUI Galway and the Marine Institute, they are institutions; the Burren has been singled out as a place to visit for its unique flora and fauna and the living landscape of the farming community. It is huge,” Ms Curtin concluded.