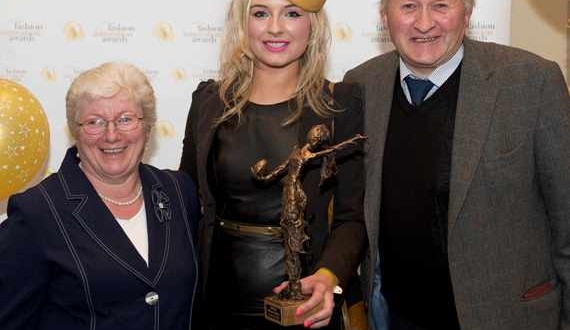 North Clare milliner Margaret O'Connor, who was awarded the title of Millenery Designer of the Year at the Irish Fashion Innovation Awards, with her parents Marion and Pat at the Radisson Blu Hotel, Galway

Hats off to milliner Margaret

BOSTON milliner Margaret O’Connor was awarded the title of Millinery Designer of the Year at the prestigious Irish Fashion Innovation Awards, held in Galway last Thursday.
The judges at the event were Eddie Shanahan, chairperson at the council of Irish Fashion Designers; Deidre McQuillan, Irish Times fashion journalist; and Patricia McCrossan, managing director of Golden Egg Productions.
This was the fifth annual Irish Fashion Innovation Awards and it was held in the Radisson Blu Hotel in Galway.
This was the first time the North Clare milliner has been involved in this awards show and she said she was really surprised to have won the award. She said the shock set in when the room went from being calm and reserved to people going “mad” with excitement for her. Joined at the event by family and friends, Margaret said she couldn’t believe it.
“I’ve never won anything like that in my life. I’m so delighted. I didn’t think I would win. I just went because it was an excuse to go home. I thought I could come home for Easter and go to the point-to-point – my father loves horses. If I didn’t get into the competition, I wouldn’t have come home until June, so to win was fantastic.
“I just wanted to make my family proud. They all support me and I’ve been in London, working away, and no one really knew what I was doing. I was lying low. I want to come back to Ireland and say I’ve been working really hard and here is what I’m capable of. The award was really about getting the pat on the back and being recognised and realising, for me, that I’m succeeding in my dreams and on the path I’ve chosen. My mam and dad were so proud and all my family. I’m one of eight,” she said.
Margaret has not only been recognised for her talents by the Irish Fashion Innovation Awards judges, but her talent has also been noticed by Lady Gaga, who has worn one of the North Clare milliner’s designs.
“It’s a start, until I’m on the catwalk – then I’ll say I’m a success. I want to be on the London catwalk and the New York catwalk. I don’t want to be just a designer. I want to be recognised in the fashion industry, not just for race days. I enjoy that side of it too but I want to do both. I want my crazy hats and I also want my commercial hats,” she said.
The award has also meant a lot to Margaret, having studied textiles in GMIT. She said it was fitting that the awards ceremony would be in the city where it all started for her.
“It is nice to come back to Galway, where I studied, to win an award for something that is my passion. I knew when I left Galway I wanted to be a hat-maker. To come back after seven years and to have launched my label is great,” she added.
Margaret has been living and working out of her East London-based studio in Walthamstow for the past three years but, going forward, she says she would like to be able to come home more. “This year and next year are very important to me. I’d like to be recognised in London and maybe be able to move home, I want to chase the dream of getting on the catwalk and see what happens then,” she concluded.
Also taking awards at the event were Sligo-based designer, Rebecca Marsden, who was named Designer of the Year; she also took the inaugural