Home » News » No power or water 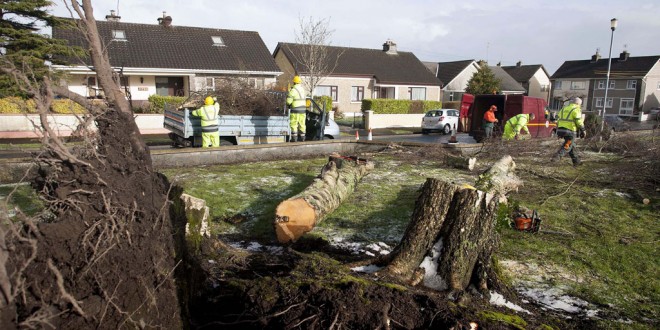 No power or water

AFTER the storm comes the damage assessment and the clean up in County Clare.

Hurricane-like conditions, which swept through the county on Wednesday left a trail of destruction in its wake. Winds gusting up to 160kph brought down power supply lines, uprooted trees, leading to numerous road closures, while slates were ripped from houses and property damaged.

At the height of Storm Darwin, the ESB estimated that as many as 20,000 homes and businesses were left without power across the county. The south east of the county was worst affected with power outages reported in Killaloe,  Cratloe, Sixmilebridge, Newmarket, Clarecastle, Tulla, Ennis and other pockets of the county.

Despite the fact that ESB Networks crews have been out in force trying to restore power supplies, many of those areas still remain without power. The problems facing many home owners have also been exacerbated, as the knock-on effect of outages was the lack of water supply. Many householders could have to endure this crisis for another day or two.

No major routes are closed though the storm has left roads in Ennis, the N85 from Ennistymon to Ennis and the M18 motorway in a very dangerous condition. Debris is also a concern.

Irish Rail says its services from Ennis to Limerick and Athenry are not operational and bus transfers are in place.

A number of primary and secondary schools around the county are closed this Thursday.