Home » News » No copy of beach bylaws for gardaí 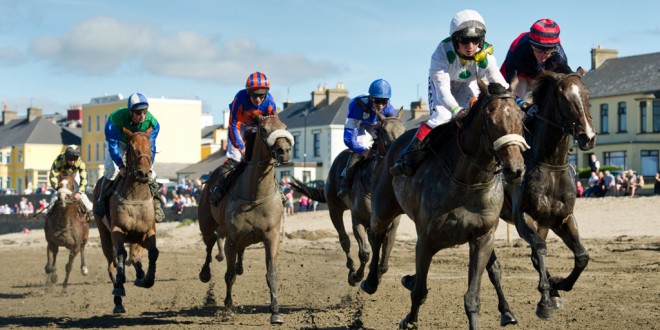 The competitors racing on the beach during the recent Strand Races at Kilkee. Photograph by John Kelly

No copy of beach bylaws for gardaí

KILKEE town mayor Paddy Collins has claimed that Kilrush gardaí didn’t have a copy of the Kilkee beach bylaws to consult when they were called by him to the strand races on the local beach on Sunday, September 22. He made the claim at last week’s meeting of Kilkee Town Council, where he also claimed Kilrush gardaí “ignored” the presence of traders on the beach.

“We had an issue with traders and parking again this year. I phoned the organisers, who said they had no authority to prevent people coming in or to ask them to leave. So I phoned Kilrush Garda Station on the Sunday at about 12.30pm,” Councillor Collins said at this week’s monthly meeting.

“The garda said he’d send out a car. Half an hour later, the car was in town. It didn’t stop, ignored it and just drove past. [Councillor] Elaine Haugh also phoned at 2.30pm. There was a bouncy castle present, which had been removed on a previous occasion. Anyway, the gardaí did nothing. I emailed the superintendent about it,” Councillor Collins added.

The email didn’t immediately reach Kilrush Garda Superintendent Seamus Nolan, as his secretary was absent due to illness.

“I was in contact with Sergeant Andrew Lynch in the last two days,” Councillor Collins revealed. “He thinks there was a breakdown in communication because the gardaí were up here that Sunday morning checking out licences at 11.30am. He believes that the wrong message went out. They thought the job was done so they left town,” he stated, before claiming that Kilrush gardaí didn’t have a copy of the relevant beach bylaws.

“They don’t have a copy of the [Kilkee beach] bylaws down in the station. They went onto the Kilkee.ie website but their computer system couldn’t download it. So they requested a copy in a suitable format. They promised that it won’t happen again and they’re very sorry,” the town mayor noted, before pointing out that some Kilkee business people were disappointed to s