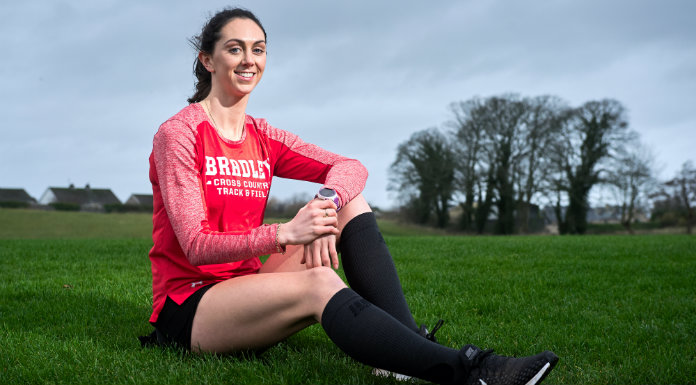 Niamh has her sights set on US colleges’ indoor season

If her older brothers are up for a Christmas run, Niamh Markham is ready.

The Bradley University Masters student is home from the US for Christmas. Already a teacher training graduate of St Pat’s in Drumcondra, Niamh, who is from Derryguiha, which straddles Coolmeen and Kilmurry McMahon, is studying Non Profit Leadership in the US, while also running for the college.

While at home, she is training regularly with her old club, Ennis Track, and around the roads of West Clare. She is confident that she would definitely leave her eldest brother in her wake.

“Brian Markham is into the GAA now. He’s football mad. I’d definitely take him, although maybe not over the sprint. He knows that. I’d say he wouldn’t even race me now. Liam is still in Chicago and is working over there. He’s still running and he joined Padraig Pearses GAA Club. He started playing with them this summer. It’s always going to be in us to go back to the GAA. Two years ago I was still running but I was playing with Coolmeen ladies’ football. We won the intermediate championship that year and it was special,” Niamh reflected.

Her current base in Peoria, Illinois is quite removed from her early days in athletics.

“Brian and Liam started off with our local club, St Mary’s AC, at a young age. As the little sister, I had to do what they were doing. I started running around after them, when I was four or five, at the track in the local GAA club. I had a great coach in Pat Hogan from aged 12 or 13 at Ennis Track. He’s still with me now. I was trying to play basketball, football and soccer when I was in secondary school at St Flannan’s but I dedicated more of my time to athletics as I got older,” Niamh explained.

She loves her chosen sport but it’s often a solitary past-time.

“It’s a very lonely sport. Although, when I came to Ennis, it was a bigger club and you were training with more people. The beauty of a team sport is that you are relying on everyone else but as an individual, if I do badly, I have no one to blame but myself.”

She had the option to head to the US after her Leaving Certificate but decided to hold off, a decision she feels was the right one.

“I always wanted to pursue a career in primary school teaching and the initial thought of everyone from Clare is to go to Mary I. Athletics were always in the back of my head though. I was thinking about the American path after the Leaving. Liam did that. He went to University of Illinois. He took a year out after the Leaving Cert and did his undergrad there for four years. I got a little bit of doubt and I didn’t know if I was good enough for America and it wasn’t for me.

“I went to DCU, who are connected with St Pat’s, which is the other teacher training college. There was more athletic opportunities at DCU. I got a little bit of help financially and if I was to continue on competing at athletics, it was as good a system as you will get in Ireland. You’re in an apartment with other athletes. You’re in an environment with the same mentality and culture. It’s easy to get off track at college and it was something I didn’t want to do. It was towards the end of my time at St Pat’s and DCU that I realised I wanted to continue it on. I had two years eligibility in America to do a Masters and that was an option,” she said.

Heading to the US in her 20s was less daunting than it might have been four years earlier.

“When I was 22, I felt I had a little bit more life experience and a little bit more maturity. I think things happen for a reason and there was a reason I didn’t go straight out of Leaving Cert. Going when I was that little bit older, definitely helped with the transition. It is a little bit different to West Clare and what I grew up with. I got so lucky with the school, Bradley University.

“When I thought about going over, I got help from Liam who was still over there. He knew the different schools and programmes. You hear of people going over there and it’s a disaster. The team mightn’t be good and some of the coaches run you into the ground.

“I did my research into the team and the coaches. I talked to a few different colleges. At Bradley University, I was talking to Coach (Darren) Gauson. He’s from Scotland, which helped and I honestly got a gut feeling. I knew he was progressing the programme really well. There was something telling me to go for that one. It worked out and it was meant to be. It was a perfect fit for me,” Niamh reflected.

Her strongest suit is middle distance running but she has done well in the US at cross country.

“I’m more of an 800m or 1,500m runner. We were going into their cross country season. It’s high mileage and a lot of running that I wouldn’t have been used to but he made that transition really easy for me. The coach listens to what I want as well and it has worked out really well. I’m thrown into the cross country too, which isn’t my best event. But, surprisingly, this year it went really well for me. The distance for the cross country is 5km or 6km. It’s different to the cross country here! We’re running on nice golf courses over there. No going through long fields of grass that have little stakes and bits of rope!” she laughed.

Niamh will graduate at the end of May and is considering staying in the US for another year.

“I might stay out for another year and work. You can work for another 12 months within your field of study. Then we’ll see if Trump kicks me out for not,” she joked.

Niamh has enjoyed an injury-free 12 months for the first time in several years. However, she doesn’t envisage running professionally, although she will always run.

“That’s not my calibre unfortunately. Bradley University is about two hours from Chicago. I’d like to move to Chicago, join a club and work there. It’s different over there. Once you finish college, the work lifestyle comes into play. I’m not going to be done running. I don’t think it’ll be something I’ll ever be done with.”

While at home, Niamh has to stick to her training schedule, whatever the weather.

“This is the time that is crucial for the indoor season coming up. I’m lucky that I come back to Ennis Track Club and my old coach, Pat Hogan. I join in with them. There are a lot of young athletes coming up, which is great to see. On Monday I was on the track and I had another run to do that evening. It was dark and in West Clare there are no street lights. So I got my dad to drive behind me with the lights on in the car.”

A strange sight to see surely? “It must have been but do you think anyone saw it? There wasn’t a car out on the road. You know it has to get done and it’s easy to say no.

“It’s about being on the starting line for the indoor season, knowing that you did everything you could. It starts on January 11 or 12 and it will go on until March. Track season will start then until the end of May. My goal for track season is to qualify for NCAA regionals in California,” the clear-sighted West Clare girl concluded.

You can listen to the full interview with Niamh below