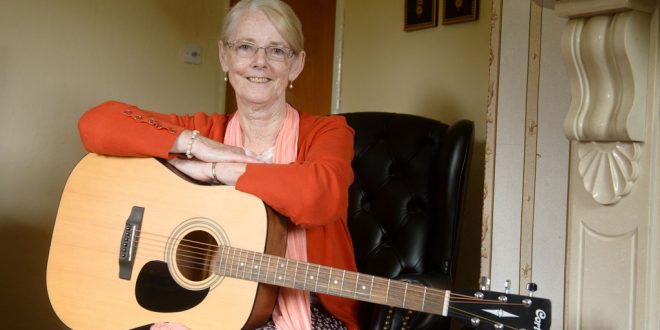 The  Archbishop of Cardiff George Stack, led tributes to Clare born nun, Sister Mairéad Noonan, at a special mass in Wales recently to celebrate the 50th year of her religious profession.

A native of Moohane, Newmarket-on-Fergus, Sr Mairéad is attached to the Sisters of St. Joseph of Annecy at LLantarnam Abbey, Cwmbran in South East Wales.

The mass in Llantarnam Abbey  was attended by Sr Mairéad’s mother, Ellen and members of the Noonan family.

A daughter of Ellen and the late Charles Noonan, Sr Mairéad attended Ballycar National Achool and Ennis Vocational School before becoming a member of the Sisters of St Joseph of Annecy in Llanternam Abbey. She then undertook teacher training in Newman College in the University of Birmingham after which she pursued a training course in psychotherapy .She is now an energy and  health practitioner in Llantarnam Abbey.

A former Cistercian monastery, Llantarnam Abbey was also a depot for the American Army during World War II. In 1946 it became a monastic institution again in the hands of the Sisters of St Joseph of Annecy, who were founded in Le Puy, France in 1650 in response to the challenges of the times.It has about 14,000 members worldwide, 7,000 in the U.S. and 2,000 in France. It is also active in 50 other countries.

A number of priests who served in the Archdiocese of Cardiff for a long number of  years are buried in Llantarnham Abbey graveyard. Among them are Canon Tom Brennan, who was from Ennis, and Canon Jim Mulvihill who was a  native of Whitegate.