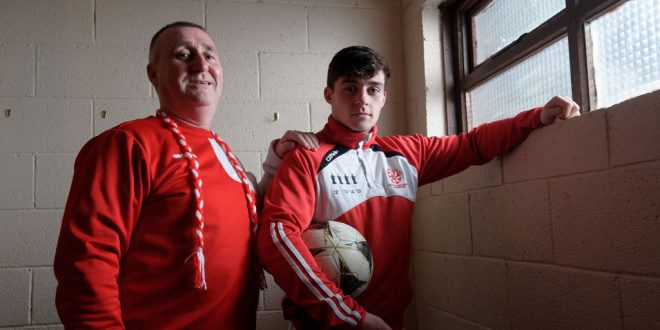 Kieran Collins, who played in the 1985 Munster Junior Cup final, and his son Ian, a member of the current Newmarket team. Photograph by John Kelly.

In a hard-fought tie played at McDonough Park in mid-January, the Clare champions came from behind to win in a penalty shoot-out. That victory is sure to give them great confidence as they put the finishing touches to their plans for this Saturday’s clash.

Mike O’Malley is unlikely to name his starting line-up until Friday evening but it is expected to be along similar lines to that which played back in January.

“Thankfully, all of the lads involved with Clare came through without injury in the Oscar Traynor final and they are sure to be boosted by that result,” O’Malley said.

Newmarket have put in a huge effort all season as they went in search of success in provincial and national competitions. They know their Tipperary opponents are one of the strongest junior sides in the game, a side with a big following, which is sure to lead to a huge number of supporters making the journey to Clare headquarters on Saturday.
In Paul Breen, Jimmy Carr, Richard Ryan and Padraig Fogarty, St Michael’s have players who are sure to make things difficult for the Clare men.

Paddy Purcell, Stephen and Alan Kelly, Eoin Hayes, Colin Smith and Dave McCarthy have been outstanding for club and county all season. They know the work that has been put in to get to this stage of the competition and they will want to cap off a busy season by winning this title and making history by becoming the first club to bring the Munster Junior Cup to the Banner County.

It will take a huge effort but they have the ability to achieve that goal.