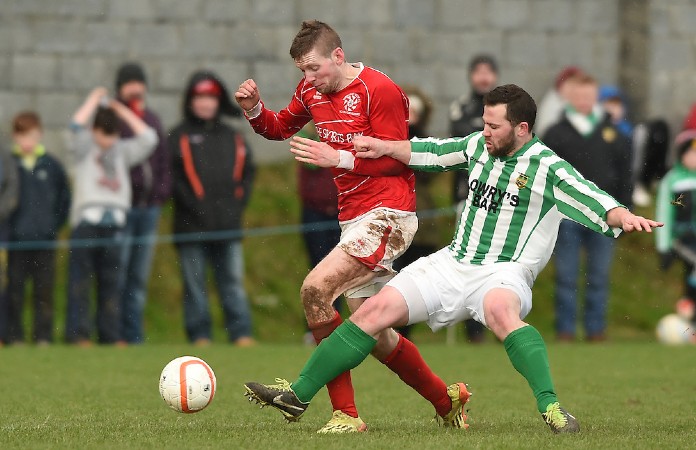 Newmarket Celtic have to chance to avenge their penalty shootout loss to St Michael’s of Tipperary town when they welcome them to McDonough Park this Sunday.

St Michael’s broke Newmarket hearts in last year’s final with a 5-4 win in the penalty shootout but the sides meet at the quarter-final stage this year.

Newmarket will definitely feel they have a bone to pick with St Michael’s with plenty of recent history between the clubs and home advantage will be a big bonus for the Clare side this Sunday.

Newmarket will be under no illusions as to the enormity of the task ahead as St Michael’s are the reigning FAI Junior cup, Munster Junior Cup and Munster Champions Trophy holders.

Mark O’Malley is in his first season as manager of Newmarket Celtic’s premier side, having graduated from being at the helm of the B side, and he believes his side are in with a big shout as long as they bring their A game.

“We have come up against them an awful lot in the last few seasons, but that’s the way the draw goes sometimes. They’re the best team in the country at the moment and we won’t be underestimating that. To win what they won last year, is phenomenal. To keep all three going in the one season is exceptional,” O’Malley said.

He continued: “This is my first season involved with this team, but I would’ve been at most of the clashes between these two sides in recent times and our lads know the games they were unlucky, and also they games they just didn’t turn up in.

“If you don’t perform yourself; you’re going to be torn apart by this team. They’re that good. But, when you look at last year’s final, on another day Newmarket might have beaten them. I thought Newmarket were the better team that day. This team have been together for a while now and have been knocking on the door, so they know what it takes.

“A home draw for us is huge and hopefully we get a big home crowd up there and give them something to cheer about,” O’Malley stated.

While Newmarket could curse their luck for continually running into Michael’s, Mark says that due to the regular recent clashes between the sides, Newmarket have learned a lot and will know their opponents quite well on Sunday.

“Newmarket have been the big club in Clare for a while now, but we haven’t won anything outside of Clare. We won’t fear this crowd either though, we have been knocking on the door against them for a while now. They know that we cause them problems too. Every game between us has been tight, bar the odd game where we didn’t turn up.

“Hopefully we get the rub of the green, and with the home support too; you never know. They are the favourites though and it is nice to go into a game as underdogs for a change. We have nothing to lose and we will give it a good lash,” O’Malley insisted.

Newmarket’s Oscar Traynor contingent will be approaching this game with confidence as they helped Clare to a 2-1 win over Kerry with a good display and with four of Clare’s 11 being Newmarket men.

Stephen Kelly will also be involved for Newmarket after missing Clare’s two opening Oscar Traynor games and with Eoin Hayes, David McCarthy, Shane Cusack and Kieran Mahony all starting for Clare, they will look to keep their good run going.

Colin Smyth will be the only Newmarket player to miss out having picked up a season-ending injury playing football for Éire Óg and with a near full complement to choose from, O’Malley is confident his side will give the strongest Junior side in Ireland the fright of their lives.