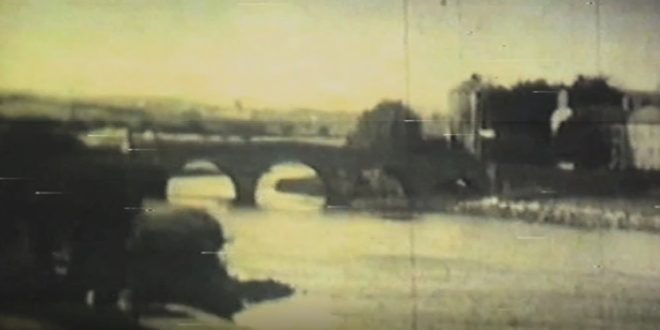 OLD cine-films taken in Clarecastle in the 1950s showing aspects of the village in that era and the unloading of ships at Clarecastle Quay have been discovered and digitised.
The film is now set to be released by the Clarecastle & Ballyea Heritage & Wildlife Group on Saturday, August 15 to mark the start of Heritage Weeks 2020.
The Clarecastle & Ballyea Heritage & Wildlife Group has amassed a large collection of old photographs over the years. This was done by appealing to the local community through the local press, the press used by the Irish community in England, parish newsletters, open nights where the local community brought in old photos. These images were scanned, with the group not only capturing the picture, but also the story behind the photographs.
During one of these sessions the group was told of the existence of reels of old cine-film with images of the village and Quay areas. They approached the owners and were given free access to 100s of feet of Super and Standard 8 cine-film from which this film was captured.
The 1950s films were taken by Anthony Considine, the son of Patrick Considine who had been Harbour Master in Clarecastle for many years and who had a long association with the net salmon fishing on the Fergus.
Eric Shaw of the Clarecastle & Ballyea Heritage & Wildlife Group explains, “The arrival of ships ceased in 1969 and the film captures the maritime history of the port of Clare in black and white and full colour.
“Clarecastle is the fastest growing village in Clare and there are many people now living here who would be totally unaware of the importation of coal, timber and other products from England, the Baltic countries and Canada. Other events linked to the quay such as the annual regatta are also captured in the film. The film is an important archival item that will benefit the local schools as well as the general public and will be a nostalgic reminder of times past for the older generation. We are indebted to the Considine family for access to the old films.”
Scenes in the film include the unloading of the Tourmaline on 1 September 1953 with coal for Dan McInerney of Ennis. There are also scenes with the houses on Old Clare Commons where Madden’s Terrace stands today as a backdrop. Unloading of the Quirina on 23 October 1953 with firebricks for the Clarecastle Pipe Factory is also featured alongside scenes from the 1953 Clarecastle Regatta. While the five-arched Clare Bridge that was demolished in 1970 appears in several scenes in the film.
This is the latest project by the Clarecastle & Ballyea Heritage & Wildlife Group. In early 2019 was invited by iCan to participate in a pilot scheme with four other heritage groups from County Clare to establish a website to store and display our collections of old photographs, publications, research documents etc and to have all its collections archived under the auspices of the National Museum.
The website has been up and running since last autumn. During Covid-19, the group also set up Facebook and Instagram pages using materials from the website to make its contents available to younger viewers.