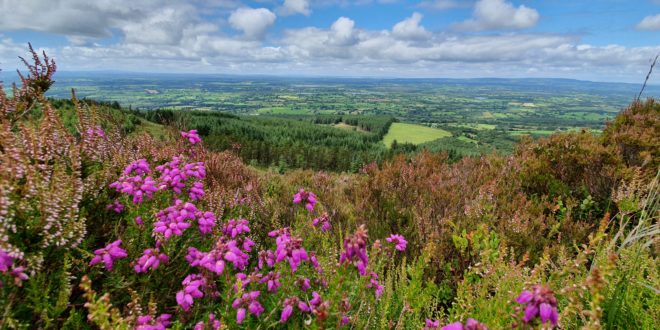 THE jewel in the crown of tourism in South East Clare has been enhanced even further, with the development of a third walking trail at the 12 O’Clock Hills, which is set to open to the public this weekend.

The new 13km route is a looped trail, and sets out from the new car park at Belvoir Trailhead. It initially takes the same route as the two current Red and Blue trails. It then turns right at the exit from the Crag River Walk section at Crag Bridge. From here, the trail continues for approximately 200m on the public road, and then takes a right turn down an old Famine road (marked with an information board). A left turn takes the walker up an old boreen which links to a Coillte-generated road. Further along this road, there is a left turn and uphill climb of 252m to whet a hill walker’s appetite. This hill is known locally as Loughavarra in the townland of Ballyvourgal South.

From here, panoramic views take in the Shannon Estuary, Foynes, the River Fergus, wind turbines on Sliabh Callan, Newmarket lakes and Ballycullen Castle and more. The trail then turns in a north easterly direction past Oatfield radio mast before merging with the existing 12 O’Clock Hills trails on the western side. Overall, the new trail covers three hills, with a total ascent of 499m and a maximum elevation of 290m. It can completed in three to 4.5 hours, depending on fitness levels.

For less experienced walkers, there is a shorter option of a 7km loop. This can be accessed by taking a left turn by road back to the car park, after completing the Loughavarra climb.

Signage is currently being erected and the trail will be open to the public from July 31.

Introductory walks of 13km and 7km are planned for the August Bank Holiday Monday depending on demand. The trail will be fully waymarked with purple arrowheads for this upcoming long weekend. The walks, which takes place in groups of 15, will adhere fully to social distancing rules. Advance reservation is required and a time slot can be booked by calling 087-9691415. The time slots available are 8am, 10am and 12noon. There is no charge and donations can be made to an honesty box. Anyone doing the 13km walk should bring a lunch and plenty of drinking water.

The development of the third trail follows the recent development of a spacious car park to accommodate growing visitor numbers and the addition of a Fairyland facility for families.

The Knockanuarha 12 O’Clock Hills are situated about 5km south east of Kilkishen Village and accessible from two Trailheads at Belvoir and Snaty on the L3016 road between Sixmilebridge and Broadford. There are two hills, the main one at 309 meters in height is marked by an Ordnance Survey Trig Point or Triangulation Pillar. The other adjacent hill is about ten meters lower and approximately 400m in a west-south west direction from the main peak. It is thought that the name 12 O’Clock Hills derives from the tradition of telling when its noon time by observing the position of the sun in relation to these twin hills.

The heritage sites in the area are identified by way of information boards which tell the story of the particular site. Both trails take in a section of Crag River with its stone bridges and waterfalls, which appear after bouts of heavy rain.

Further developments have taken place through the years focused on improving the walking surface (erosion from footfall), hard coring of the trails to the upper hills and the installation of boardwalk in the lower muddy sections of the trails. In 2019, a new and spacious car park was developed at the Belvoir Trailhead with capacity for 80 cars). After that, a Fairyland facility to attract young families to the hills was developed.

In early 2020, the process of planning a third trail began, with a view to adding more variety to the walking or hiking experience. The purpose is to accommodate  hikers or hiking groups, who travel the longer distance to the facility in expectation of a three-hour minimum walk. It also offers a variety for less experienced walkers to make a return visit to complete the full offering. The area, selected because of its panoramic views, is in the townland of Ballyvourgal South which has a hill climb of 250m.

The committee has also expressed deep gratitude to Coillte for facilitating this new trail and for their support from the outset of the project, and thanked the Heffernan, Bliss and McInerney families their support. Clare County Council were also thanked for the regular patching of the potholes leading to the car park, without which the project would not have been possible. The Thomas Cavanagh Tomar Trust was thanked too for help with the funding of the car park and the latest offering of the new trail.

The committee is currently looking to recruit volunteers to help out with the organising of car parking, according to a 2-hour rosters, on either Saturdays or Sundays. A cabin has been installed in the car park to support this voluntary work, by way of a cuppa or a place to shelter between showers.  Prospective volunteers are asked to contact 087-9691415 or any of our committee members listed here: P Neville chairman, J Lenihan vice chairman, G Grace secretary, A Devitt treasurer, J Lyons, N Gallagher, S Corish, J Hyde, G McErlian, C McMahon, O Liddane and J Power.

Fiona McGarry joined The Clare Champion as a reporter after a four-year stint as producer of Morning Focus on Clare FM. Prior to that she worked for various radio, print and online titles, including Newstalk, Maximum Media and The Tuam Herald. Fiona’s media career began in her native Mayo when she joined Midwest Radio. She is the maker of a number of radio documentaries, funded by the Broadcasting Authority of Ireland (BAI). She has also availed of the Simon Cumbers Media Fund to report on development issues supported by Irish Aid in Haiti. She won a Justice Media Award for a short radio series on the work of Bedford Row Project, which supports prisoners and families in the Mid-West. Fiona also teaches on the Journalism programmes at NUI Galway. If you have a story and would like to get in touch with Fiona you can email her at fmcgarry@clarechampion.ie or telephone 065 6864146.
Previous Burial ground costs more than double income generated
Next Man due in Court over Kilrush incidents 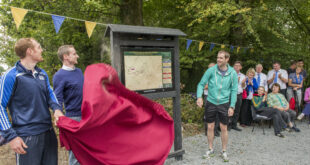