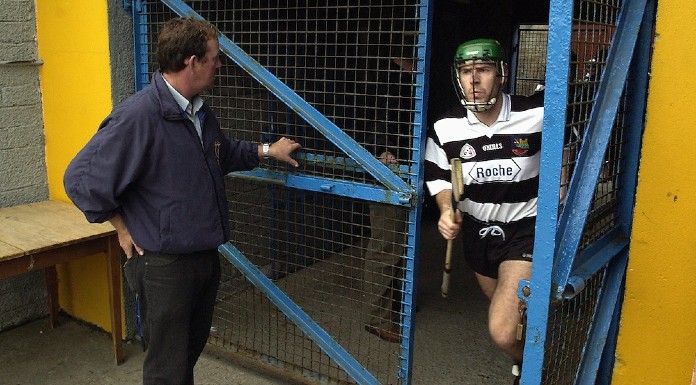 His Banner passport has been stamped with a long time, but the thoughts of facing his native Tipperary in his first competitive outing as new Clare hurling selector is something Ken Ralph is clearly relishing.

When asked about the prospect of the new era getting underway with a Munster League opener against the reigning All-Ireland champions, he just grinned and said: “Someone told me we will have to applaud them onto the pitch and I said I had nearly forgotten about that”.

His heroics in both the saffron and blue along with the black and white of his adopted Clarecastle means his credentials as a fully fledged Clare man have long since been signed off on. A Munster club championship winner with the Magpies in 1997, he accounted for 1-4 of their tally in that famous final win over Patrickswell. He was captain six years later when Clarecastle won the Canon with victory over Ballyea, with a return of 1-9 for Ralph on that day.

It was work in De Biers (now Element Six) that first brought him to the county in 1989, with the initial plan being to give it two years and see how things went. 30 years later he is still here, but he admits the role of Clare hurling selector is not one that he ever envisaged taking on.

“It probably wasn’t at the top of my list because I never really expected that chance to arrive at my doorstep but when someone like Brian Lohan asks you to do a job like this; he is not asking you to say no. After having a think about, I said right Brian, if this is what you are going doing and you want help then I will try to step up and do my best for you. We were together for three years in UL with some success and there were some disappointing days which you will always have too. We got a feel for the way we operate and the way we think and the way we work and he was happy to try to go with that again. I would have worked with a number of the current Clare panel at underage level in the development squads and we have a few of the lads from club level at Clarecastle in at the moment too. It means that along with looking at these lads gracing the fields of the country, I was fortunate enough to do a bit of work with them at underage so I have a fair idea of the personalities of a number of these guys” he noted.

Clare’s first outing came last weekend in a challenge match loss to Galway in Ballinderreen, during which a number of players pulled the county jersey over their heads at senior level for the first time. Regulars like Tony Kelly, Shane O’Donnell, John Conlon and Podge Collins were all absentees, while every member of the panel on the day saw action. Ralph feels it is vital that everyone who earns their shot to hurl for Clare gets it.

He said: “What kind of a set-up is it if it is not open-ended? You have to give guys a chance and club players have to know that if they are working hard in their club and playing well enough that there will be an opportunity for them to stake a claim and that is what we are going to try and do. We have a number of new guys in that probably would not have played senior inter-county certainly and possibly underage too. Not having played before should not exclude anyone and certainly does not mean that you won’t be good enough this year. Brian has stated it is a clean slate and he has said that to us too that is has to be that way. Everyone will start on the same footing so the best panel will be picked and on the day, the best team will be picked and I don’t think you can do anymore than that. It is the fairest way and if everyone sees it for being fair, they will likely buy into it a lot easier”.

It is a maiden journey for Ralph at senior inter-county management, but his prior knowledge of players at underage and colleges level meant that he was not starting on a total base level in the role. He feels seeing how the squad operates up close has been an eye-opener for all involved.

“I would known a number of them from underage and watching them from a distance at senior level but you don’t realise how professional and dedicated they are until you see them in the rain and muck on a November night and they driving each other on. I think we all said when we saw them those first few nights that nothing is going to hold these lads back because they just want the best for themselves and it has been very positive and very encouraging for us to see that. We have to try and step up to match that too so it has all been good so far in that sense” he said.

The challenge of managing resources and funnelling them towards the right areas is something that has already been identified as a challenge for the squad in 2020. Ralph feels while a huge amount of emphasis is placed on the scientific part of the game, it is important not to lose sight of what is happening between the white lines.

“I knew there would be a lot of time required but I don’t think I fully realised just how much time was needed. The challenge now is to work around that and manage it. Everyone is busy so when you sign up for something like this you just have to get on with it and do what you can. Brian made the point to us that some set-ups have anything up to 30 people on their backroom staff and that is not something we can have. It will mean us doing a lot more work but we are doing it anyway so we certainly won’t be using that as an excuse. We will do what we have to do to get the job done. It is all about striking a balance really. In the modern game, you could get bogged down in looking at stats for this and stats for that and you could get totally bogged down in it. It has a place in the modern game and you do get valuable information from that kind of feedback but it doesn’t make you score a goal in Thurles in May either. It is all a help of course but you can’t lose sight of the fact that you have to go in there and mark a big hairy number three from Tipperary at some point too. Getting the balance on that kind of thing will be very important and it is our job to try and do that as best we can” he stated.

The new set-up might only have had one outing so far, but a more direct style of play was already evident last weekend, albeit in defeat. Ralph feels this time of year is all about focusing on performances more than tactics and giving players the opportunity to put their hand up for a starting number.

He said: “We have identified a way we would like to play and a way we would like to set-up but it is probably a bit early to be implementing that kind of stuff at this time of year. I think at this stage of the season, we need to let players, especially ones that we have just brought in, just go and play and see what they can do. We need to see if they can go out and win ball and do something with it. The last thing you need to be doing in November and December is to burden young lads with telling them they have to do this or you have to do that. They are just told to go out and do what you can do and see can you impress us that way. We don’t need anyone to be moving mountains this time of year but if we see some little spark, that is what we are looking for really. At a later day, we can try to mould it all together then”.

First up for Clare is a showdown with Tipperary in Nenagh this Sunday, with the Premier expected to be much changed from the side that lifted the Liam McCarthy in September. They will be soon heading off on their team holiday after that win, and while there has been criticism in some parts about a pre-Christmas fixure, Ralph think it is one that will help to test where the new look Banner project is at.

“They are the All-Ireland champions and proved the best team in the country in 2019. I think it’s great that we are not going around looking for challenge matches and we can go down and play Tipperary. It is a great opportunity for a few new faces to go down and have a cut, whatever the make-up of the Tipperary team is. Hopefully those lads can impress and stake their claim going forward” he concluded.