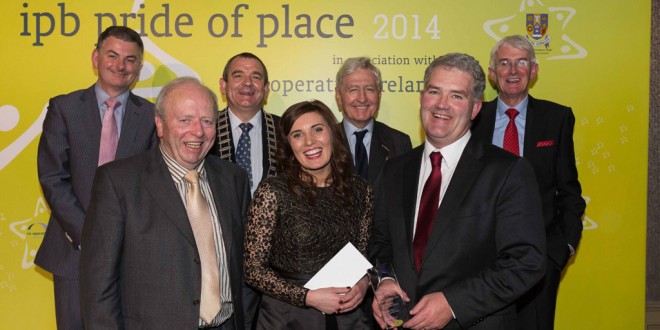 THE enterprise and vision that transformed unused farmland into a state-of-the-art €2 million recreational park in Killaloe has been officially recognised with a national award.

Clarisford Limited scooped a runner-up award in the national Pride of Place Community Innovation category at a function in Treacy’s West County Hotel, Ennis on Saturday night. Members of the group from Killaloe and Ballina were presented with a statuette and a €500 cheque for displaying great community innovation.

Spearheaded by former Lions and Irish rugby star, Keith Wood, Clarisford Park was set up to provide a home for Lough Derg FC, Killaloe Ballina RFC and the local scouts group. The dream of providing a new recreational area for the local community became a reality due to funding from the Keith Wood Foundation, Clare LEADER, sports capital grants and the three anchor tenants clubs, who contributed about 10% of the overall cost.

In fact, it has totally exceeded initial plans and expectations, with more than 2,700 people using it on a weekly basis.

The local scouts group had a huge waiting list. However, the new facility means they can set up another scout group, which will dramatically reduce their waiting list. Also used by local schools and the athletics club, the recently launched Park Run on Saturdays attracts more than 100 participants to the venue and it is also availed of by other groups and individuals.

Caroline Madden said the original group, which included Keith Wood, set out a 15-year plan to create the new recreational area but this has now been achieved in just five years. She pointed out that St Anne’s Community School, Killaloe and all the national schools get free usage of the facility.

“Not only is it catering for the needs of Killaloe and Ballina, it is now a hub for the Mid-West region, as people come from Nenagh and Limerick to use it. The social aspect of getting families to come together and getting more active is the legacy of the project. This community sports facility is something that can be replicated all over Ireland regardless of the size of the village,” she said.

The facility boasts a full-size all-weather soccer pitch, rugby pitch and 3G all-weather pitch near St Anne’s, which can be accessed through a pedestrian walkway. Next Friday, new markers and stakes will be erected, which will allow athletes to complete serious training there.

A new 4,500ft2 building, which includes an intergenerational fitness studio for young and old, wheelchair accessible toilets, dressing rooms, a referee’s room and other facilities, is expected to be completed next March.

With the population of Killaloe and Ballina growing by about 800% between 2002 and 2012, this generated the huge demand for proper recreational facilities.

“I am delighted that Clare has once again featured prominently in this annual awards scheme, which is testament to the pride of place that the people of the county have for the areas they live in,” he said.