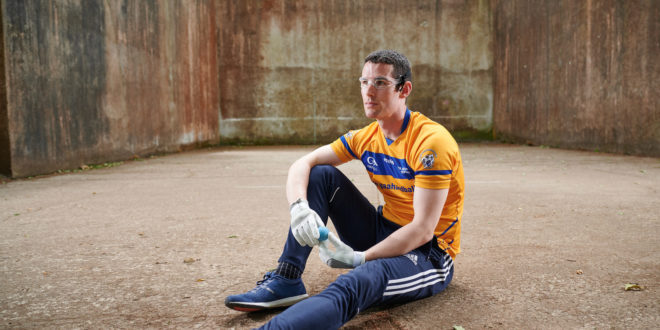 Scariff’s Diarmaid Nash, who plays club handball with Tuamgraney, revisits the old handball alley at Tinerana, Ogonelloe, where those who played for his club in the past would have frequented over the centuries. Photograph by John Kelly.

Clare handball hero Diarmaid Nash admits his bid for a historic third successive All-Ireland doubles title alongside Colin Crehan may have to wait until 2021.

Last year saw the duo emulate the famed Kirby brothers by putting All-Ireland crowns back to back, but with sport now on hold due to the Covid-19 crisis it means any future fixtures are still in doubt.

Nash, who works as a financial consultant, is not confident that they will have a chance to defend their title this year.

“The chances of the doubles championship being on are very slim unless something changes drastically. If we are under restrictions for another few months and the government decides it is something that we just cannot afford to continue doing with benefit payments, then people would have to go back into the workforce. That could create a herd immunity and maybe in that scenario we could go back playing because you are as likely to get sick from going into work then as you are on a handball court. That would take a huge shift in public perceptions and while it would be great to get back playing for mental health as much as anything, people can still get out for a run to keep exercise in their routine. I think it will take something like that until we get moving again because I would not be as confident as others about having a vaccine in the next few months” he noted.

With some outdoor sports having resumed in a social sense over the last few weeks, it remains to be seen if there will be any return to competitive action before a vaccine is found. Nash outlined his belief that things will need to be kick-started sooner rather than later.

He said: “Waiting on a vaccine is fairy dust stuff because you could be a long time waiting for that and it could take up until next summer. There is no vaccine for the likes of other diseases which are around for a lot longer, and even with the flu vaccine, it only works for around 75% of people. If there is no vaccine by next summer, and the GAA have had no championship in 2020, are you trying to tell me there would be none in 2021? I find it hard to believe that they would write of two years without a championship so I think it could be a case that we will have to try and get back to work and playing at some stage. There is only so long that people can stay in lockdown really”.

Nash also feels that the logistics around the sport mean a return to action in a safe manner make take some time.

“There are only two of us on the court for singles and four in the doubles so the amount of people at risk is less than other sports. That being said, it is an enclosed space and the fact that it is a court setting also means that you are breathing in everyone else’s air. Handball is pretty much following the GAA’s handbook so we are waiting to see when they tell us it will be safe to go back. It would be fine for the likes of me who could play a game and then go home to self isolate for two weeks without any real hassle. There are others with families who could not do that so at the moment it is just not really feasible. Handball is also technically classed as a non-contact sport but it is non-contact in the same way that the likes of basketball is because there is still some element of touching and you can get as close as you want to fight for position. They may scrap the doubles for the 2020 season because whatever about allowing two people on to a court, if you have four people on it then everyone is on top of each other and it may not be safe. I don’t know what is going to happen really and everyone is just waiting to see what the GAA decide in terms of when people can go back and play” he noted.

Handball players already wear protective goggles and gloves, but the Tuamgraney clubman does not believe the existing gear would offer much protection to the spread of Covid-19.

“There has been talk about wearing masks while playing but I really don’t think that is a runner. We do wear gloves so technically if we did touch there would some protection. It is the breathing thing is the hard part to solve. The main thing that might need to happen, and this could be across the GAA as a whole, is getting people tested before they go into play whether that is in a court or on a pitch. Even for the club championships to go ahead there is lots to think about even in the line of having a group of people going into a dressing room or how all that would work. For handball, all the goggles really do is stop the ball from hitting your face but the protection is really limited. You also have to factor in with handball that while the numbers who play are not huge and the spectators are relatively limited, they are all still in on top of each other to watch games. If it is to come back, you will probably have no spectators and the games could be live streamed on the various platforms. You could then have just the two players going into the court and they would not have to meet anyone else so it could be done maybe. That being said, it is a bit like everything else at the moment in that everyone is a bit in the dark as to what will happen” he said.

Nash is usually based in Dublin for work but since the Covid-19 restrictions kicked in, he has been settled in his native East Clare. He says not being able to play handball regularly is something that will affect players if action should return before the end of the year.

“I have been doing a bit of running and we have a bit of a gym at home so I can keep doing a bit for myself. I have not played handball for a few months now because the courts are locked up which creates its own issues. For example, if the All-Ireland final does get played, it will probably be one of the worst we have ever seen because everyone is so rusty and both players will be out of form. It is the same for the hurling and football and in many ways it could be a bit of a leveller because if it is played, no one will be coming in with any real momentum. For handball, we don’t really need much time to get tournaments played off and while it would not be ideal, it would only really take a few weekends. People may not want to do that but you could fit in a championship in a really short space of time. We already have tournaments where you have three or four games over a weekend, even if they are a bit shorter. It would not be ideal, but it could be done” he observed.

A large part of the handball calendar revolves around overseas travel for various tournaments, with Nash and other Clare competitors regularly heading Stateside to compete at international events. With one of the biggest championships due to be held in Dublin in 2021, he is fearful it might be one which overseas players are forced to miss out on.

“The US Nationals, which I was intending on going to in June, are cancelled now and there is no date for rescheduling. They had been talking about having them on again around September or October, but personally I do not think I would go because the lockdown has been so sporadic and such a mess over there. The requirement to quarantine will severely limit the international travel for handball and it is a real big issue for us with the World Championships set to be on in Ireland next year. It will be fine for us when it is on in Dublin, but they would have been expecting a big travelling cohort from the US, Canada, Mexico and Australia so whether they will all still travel remains to be seen. There could well be a vaccine by then but if there was a delay with it, it would probably mean people would not risk it so there are repercussions in that sense. It really is just a case of wait and see at the moment” he concluded.