Home » Sports » The myths and legends of hurling 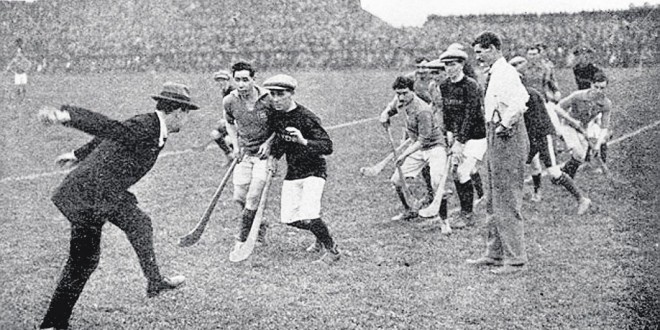 The ceremonial throw-in was very much a part of Gaelic games in bygone days.

The myths and legends of hurling

THE story of the GAA will be the subject of the final lecture in the Shannon Archaeological and Historical Society’s spring series on next Wednesday evening at 8pm in Wolfe Tones clubhouse.

Speaker, Liam O’Donoghue is involved with the Lár na Páirce GAA museum in Thurles and he said the talk will go back on events of thousands of years ago.

“It goes way back into prehistory, into the time of myth and legend. The earliest reference we have is the Battle of Moytura in 1272 BC. We take it from there right up to the foundation of the GAA and the first All- Ireland. That’s as far as I’ll be going in the talk and, to cover that amount, you don’t concentrate in huge depth on any area. But we’ll be going through the myth and legend, going through the Brehon laws, the English laws that came in to prohibit hurling with the Statutes of Kilkenny and all of that. Then, when the landlords promoted hurling, sponsored hurling and organised games in the late 18th century, it was looked on as a golden age for hurling, although in Clare ye might look at last year as the golden age!” said Liam.

“Then it’ll look at how the game suffered, the Famine and how the game nearly died out, the revival of the game and the big role that Michael Cusack from Carron played in that. That’s a very brief run through,” he said.

While it may be seen by many as the national game, hurling has never really penetrated the whole country, he says. “We have seen counties rise and fall but the general area has been more or less the same right back through the centuries, more or less. It was more popular in Donegal than it is today possibly. It’s still in Antrim and Down. The Leinster counties are much the same as they were and, in Munster, you have the domination of hurling from Clare to Waterford, that area of the country. It hasn’t really developed from the areas hurling was being played back the centuries.”

In the late 18th century, there was something close to a professional sport, backed by wealthy rural landlords, but that changed after 1798.

“There were patrons of teams and they had their own set of rules. A landlord would put up a bet against another landlord and they’d nearly have professional teams of 21 aside. The landlords would have the best of fields roped off, they’d agree the rules and the bet and thousands of people could turn up.

“It came to an end after 1798. The link between the landlord and the tenant broke and the confidence they had in the tenant was shattered after the 1798 rebellion.”

The 19th century saw the game decline, particularly after the Famine, and the game was overtaken by a surprising competitor. “In the years after the Famine, it was at a very low ebb and you see very few accounts of it, although it’s still alive in pockets of the country. There was a great growth of cricket at that time. Cricket was the game that was really growing in popularity. Every village had its cricket team.”

However, cricket would die a death with a revival in nationalism towards the end of the century.

“Cricket lasted for some years. The national significance of the game was promoted and there was a great interest at the end of the 19th century in the Irish revival and all that. Cricket, overnight in some places and slowly in others, died away.

“The link between hurling and the local parish came into it, concentration went onto hurling and some of the clergy were promoting hurling. Archbishop Croke was seen as a great nationalist voice in the country. Cusack and Davin were much admired people throughout the country and had great standing,” he said.