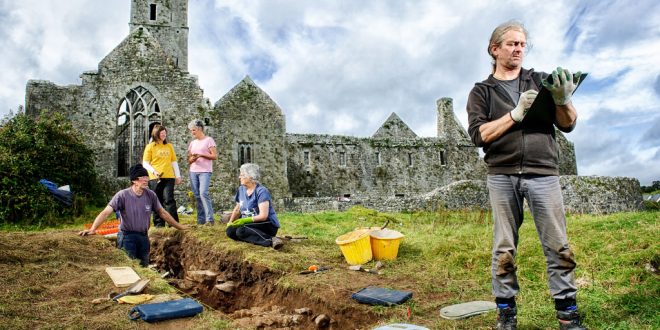 TWO artefacts were uncovered following a week-long archaeological dig at Quin Friary but the significance of what was unearthed and the structures beneath the surface will not be known for a number of months.

A musket ball and a pipe bowl were unearthed at two separate trenches at the Friary, which is locally known as Quin Abbey. Although there is no date for the musket ball, an early 17th century date has been assigned to the pipe bowl.

The dig musket ball was uncovered in the soil from a trench which revealed remnants of the old castle ditch.

One of the two archaeologists over the dig, Joe McCooey said, “We have other things to work on. We have to process everything. We have to do a lot of post-excavation work, so we will step back and see. We should have some further information for the public in three or four months time”.

He said it is hoped to hold an information evening in a few months to discuss the findings and he wished to acknowledge the huge support that the dig received.

He added that the process was extremely positive and added to the good atmosphere. The dig, he said, not only attracted people from all over the country, but also Jenny Sacher, an apprentice archaeologist from Cleveland, flew in to participate and she was the one to uncover the pipe bowl.

“We’d like to thank the OPW, National Monuments Service and local landowners, all the school kids from across the county and especially in Quin National School and all the people who took time off work. We had people from Connemara who came here with their kids and made a holiday out of it,” he said.

The excavation site has now been reinstated and Mr McCooey said the area will be monitored for approximately a month to ensure it settles back properly.