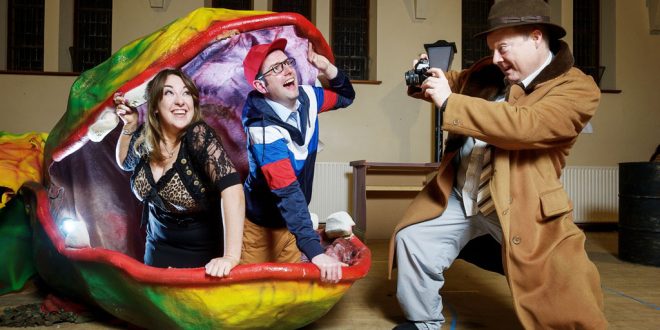 Sarah Corcoran as Audrey and Eoghan Rice as Seymour with Gary Loughnane as Mr. Mushnik in rehearsals for the Ennis Musical Society's production of Little Shop of Horrors, a horror rock comedy musical, by composer Alan Menken and writer Howard Ashman, which runs in Glor, Ennis from this Wednesday through to Saturday night. Photograph by John Kelly.

ENNIS Musical Society will present its 60th production, the dark and hilarious comedy Little Shop of Horrors this month, opening this Wednesday night in Glór.

The story is told from the perspective of a downtrodden florist shop assistant Seymour Krelborn, played by Eoghan Rice from Quin, whose interest in weird and exotic plants leads him to find a rather unusual plant of the fly-trap variety.

The plant – with the right food – promises to drag this former street kid out of the gutter and into the arms of a loving woman, bringing him fame and fortune along the way. Seymour has to struggle between his conscience and his desire for wealth and notoriety.

This year’s musical is being staged slightly earlier, with performances from March 8 to Saturday, March 11 in Glór. Typically, the society has a six-show run so with just four performances, Ennis Musical Society chairperson Anne-Marie Hassett said demand will be high.

“This year is a very special year for Ennis Musical Society, as we celebrate our 60th show, and with that in mind we decided to go big and bold for the production. We felt that Little Shop of Horrors was the right fit. It is a really funny musical, featuring some wonderful and curious characters and is a show I have been looking forward to staging for a very long time,” Anne-Marie said.

Little Shop of Horrors’ leading lady is Audrey, played by Sarah Corcoran from Ballinasloe, a ditsy florist with a no-good boyfriend and Seymour wants to see her settle down with a nice guy like him. Such is Seymour’s affection for Audrey, he names his interesting plant after her, calling it Audrey 2. He believes fame and fortune is what he needs to attract Audrey’s attention and is talked into satisfying the very specific needs of the plant in an effort to win Audrey’s heart.

However, the type of appetite the plant has cannot be satisfied so easily and Seymour soon learns that what Audrey 2 craves is blood. Seymour gives in to the plant, offering it a few drops of his own blood but when it begins to grow and catapults Mushnik’s Skid Row Florists shop into the spotlight, Seymour is left in a moral quandary. He must choose between satisfying the plant’s sinister needs to win Audrey over and stay successful, or risk losing it all.

The show is narrated by three street urchins, Crystal, Chiffon and Ronnette, who are collectively known as the Ronnettes. They are the only ones who have an insight into what’s going on in Mushnik’s Skid Row Florists and they let the audience in on the secret through their own special brand of attitude and sass.

The props for this year’s show are unlike anything Ennis audiences have seen from the musical society before. According to Anne-Marie, seeing the way the plants come to life on stage is not to be missed.

“Little Shop of Horrors involves a large element of stage production, as we must negotiate some strange and unusual props, so this year we are using a revolving stage for the first time for extra effect.

“This musical would be nothing without a scary and imposing-looking plant and we are delighted to have four creative man-eating plant props, each bigger and better than the last.

“Operating these plants for us is Stephen O’Shea from Croom, who has worked with the plant before and has been improving on it for this show. With live feedings on stage, these plants really need to be seen to be believed,” she said.

The musical has a cast of 40 and this year’s leading man is Eoghan Rice, while Sarah Corcoran joins the society to play his love interest, Audrey. Meanwhile, Ennis woman Cleo Meaney provides the voice of the creepy Audrey 2 and is ably assisted by Stephen O’Shea as the plant operator.
Ennis girls Kate Corrigan (Ronnette), Elaine Gavin (Crystal) and Carol Byrne (Chiffon) star as the charismatic Ronnettes and narrate the show.

Joining the society for the production is Shannon man Gary Loughnane, who plays the part of the money hungry florist Mushnik, while Patrick Woulfe from Patrickswell, County Limerick takes on the role of Orin, a sadistic dentist.

This year’s production is directed by Ennis woman Sarah Griffin, while the musical director is Shane Farrell.

“We have all enjoyed working on this performance since rehearsals began in January. We are having lots of fun getting into character and are really looking forward to staging our interpretation of this hit musical for the people of Ennis,” Anne-Marie concluded.