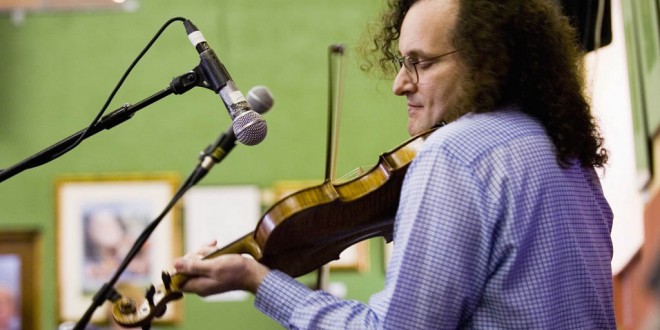 Fiddle maestro Martin Hayes at the Feakle Festival. This year's event is in doubt over Covid-19 restrictions.

THE 27th Feakle Festival of Traditional Music came to an end on Monday but the memories will  live on for locals and visitors alike.

GaryPepper was involved in its organisation and, as the dust was settling, he was exuberant about how well things had gone.
“It was a total success. The crowds were similar to last year and maybe a little bit bigger than last year. It was very well supported, the concerts, céilís and recitals all had more people at them than last year,” he said.

He added that people had travelled from far and wide to attend the event and there were numerous musical highlights. “It was a fabulous festival, the atmosphere was absolutely brilliant. The general warm feeling that we’ve had in the last number of years was there again this year. We had people from all over the world, all followers of the music, who came to listen and play and enjoy and participate. All in all, it was a complete success,” Mr Pepper stated.

“One of the highlights would have been the Friday night recitals with Lumiere from Kerry and also the Irish Concertina Ensemble on the Sunday. Also, our very own Martin (Hayes) and Dennis Cahill played on Friday.

“All of those would have been major highlights. We had a lot of musicians from Cork and Kerry. There were musicians from Mayo and Sligo too and they all gelled and fused together in sessions. It was a brilliant festival, one of the best in the country, that’s what musicians tell us,” he continued.

Mr Pepper feels the festival has been very positive for Feakle over the years. “Obviously, it was a much smaller festival then (when it started off in the late 1980s). It lasted from Friday to Sunday in the very first years but now it’s from Wednesday to Tuesday. The benefit to the economy of the area shouldn’t be underestimated. There are sales of drink and food and there’s accommodation so it’s good for the community, no doubt about it.

“It brings in six or seven thousand people from all parts of the world and that kind of an explosion into your area is great. It has knock-on effects at other times of the year too, when people come back to stay,” he concluded.