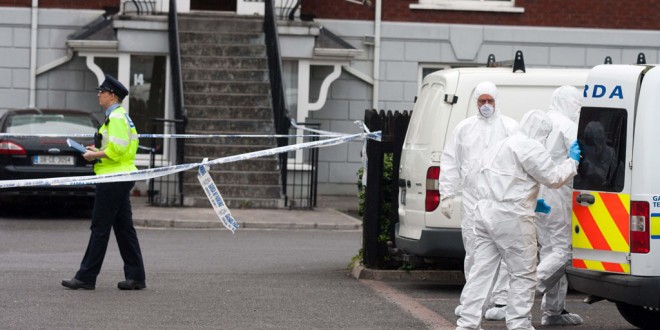 Gardaí at Sandfield Mews in Ennis following the death of Mr Piort Nomakowski.

The continuing trial of man who admits killing a Polish man in Ennis last year but denies murdering him, has heard that the accused “would be known to drink a lot.”

Michael Maughan (40) of Stone Court, Ennis has pleaded not guilty to murder but guilty to the manslaughter of Piotr Nowakowski (31) at Sandfield Mews, Ennis on July 23, 2013.

Last week the Central Criminal Court was told the manslaughter plea was not acceptable to the prosecution and a jury was sworn in for the murder trial.

On Wednesday, Detective Garda Brendan Rouine told the court that when he went to the incident at Sandfield Mews he saw a man being treated by paramedics on the ground and said he had two stab wounds to his chest.

He told Roisin Lacey BL, prosecuting, he also saw Mr O’Dea outside on the ground and he was obviously injured in the leg, face and head.

He agreed with Mark Nicholas BL, defending, that all of the residents of the Sandfield complex that gardaí took statements from heard the words “open the door” that night and only one witness, Alan O’Neill, heard the phrase “open the door or I’ll stab you.”

He further agreed that the accused “would be known to drink a lot.”

Det Gda Rouine also agreed with Mr Nicholas that the carving knife belonged to the apartment.

Earlier in the day, further memos of garda interviews with the accused during his detention at Ennis Garda Station were read to the jury.

The accused said he was angry that the men in the apartment did not let him in on the night in question as he had been up there earlier that day and thought he had left alcohol behind.

He told gardai that after he lifted his brother up to get in through a window of the apartment to let him in the front door, he went in and “thumped” the men.

The accused said that the “Polish lad came out after me” and he stabbed him twice.

He said he told his brother to get an ambulance and when the medics arrived and were working on Mr Nowakowski he kicked him in the head.

“I can’t explain, I was out of control,” he told gardaí.

The accused told gardai he was in a temper because he could not get into the apartment and that Mr Nowakowski “never fought back.”

Detective Garda Claire O’ Shaughnessy agreed with Brendan Nix SC, defending, that the accused answered every question put to him.

She also agreed that he said “I just lost it…I can’t explain why I did it or anything. I’m not proud of it or anything, my brain just flicked.”

She further agreed the accused said that he got paranoid when Mr Nowakowski
followed him out to the kitchen.

“This man did nothing to me, absolutely nothing to me. I think I got paranoid when he was following me out”, he told gardai in the interview.

Detective Garda Beatrice Ryan agreed with Mr Nix that his client answered every question he was asked.

She further agreed that she was aware the accused had been in Bushy Park, an addiction treatment centre in Ennis.

Detective Garda Frank Brown agreed with Mr Nix that he was aware the accused had been at Bushy Park addiction treatment centre.

He further agreed that the accused said he had met Mr O’Dea in Laurel Lodge, a hostel for homeless people.

The trial continues before a jury of seven men and five women with Mr Justice Paul Carney presiding.