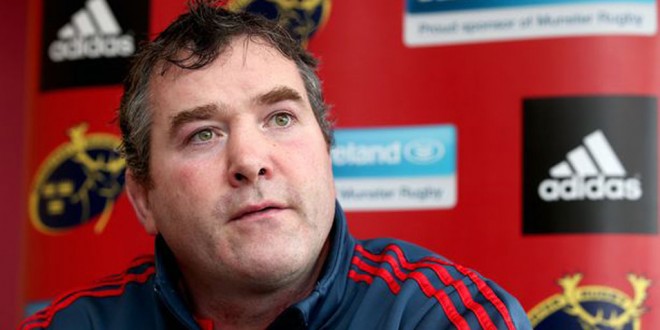 Ireland and Munster rugby families are united in mourning following the tragic death of Munster head coach Anthony Foley (42) at the team hotel in Paris.
Munster’s European Champions Cup game against Racing 92 has been cancelled as a mark of respect to Anthony, his family, players, management and staff.

On Sunday afternoon, a minute silence was observed at the Clare senior hurling final between Clonlara and Ballyea as a mark of respect to Anthony.

Books of Condolence will be opened across Munster on Monday, October 17 in memory of Anthony.

This will allow all Munster Rugby supporters from the province to express their sympathies on the sudden passing of one of Munster’s most faithful and best players.

The Irish flag will also be flown at half mast outside the local authority offices.

Anthony’s untimely passing is most keenly felt in Killaloe where he has been described as a “great community leader”.
Councillor Tony O’Brien (FF) said people in Killaloe and Clare were “shocked and devastated” with the death of Anthony.

The Smith O’Brien’s GAA Club secretary recalled Anthony was a great supporter of local community groups, annual events and charities in the twin communities of Ballina and Killaloe.

Extending his sympathy on behalf of the club to his family, Councillor O’Brien said their thoughts and prayers were with his wife, Olive, sons, Dan and Tony, parents, Brendan and Sheila, sisters, Rosie and Orla and brother-in-law, Pat Minogue.

“Everyone is shocked and devastated over the tragic death of Anthony Foley.

“Anthony was a very proud Killaloe man who never forgot his roots and was involved in the promotion of community group activities and events.

“He was a member of a highly respected well known very close and supportive Killaloe family.
“While his loss to the entire community is immense, his loss to his wife and family is immeasurable.

“He regularly attended Smith O’Brien underage training sessions with his two sons, Dan and Tony on Tuesday and Thursday nights and helped out in any way he could with these sessions.
“He was a huge leader and role model for young people in the community and was a great source of encouragement to children and teenagers in particular.

“He was a hugely respected member of our community who put Killaloe on the map,” he said.
Anthony was due to take charge of the team on Sunday against Racing 92, but that match has now been postponed.

Munster said in a statement: ” It is with deep regret that the Irish Rugby Football Union and Munster Rugby must advise of the passing overnight of Munster Rugby head coach Anthony Foley, at the team hotel in Paris.”

Clare GAA chairman Joe Cooney said “there is widespread shock at the news that has filtered through that Anthony Foley has passed away. Its a major shock to his family and to all who knew him throughout the world. Its hard to believe that this has happened to a man in the prime of his life, head coach to Munster. He was a wonderful sportsman who played gaelic games in his younger days. Our sympathy goes out to his family

Anthony captained Ireland three times during a 62-cap career, and he skippered Munster to Heineken Cup glory in 2006, with victory over Biarritz in Cardiff.
Munster’s statement added: “Munster Rugby management are liaising directly with Anthony’s family and will provide them with any assistance and support required.

The IRFU and Munster Rugby have extended their deepest sympathies to all of Anthony’s family and friends and asked for privacy for the family at this sad time.

Munster Rugby thanked Racing 92, EPCR, broadcasters and partners, and the many fans who travelled to Paris for their understanding and support at this time.”

The postponement was confirmed by European Professional Club Rugby (EPCR).

Anthony, whose father Brendan also played for Ireland, made 201 appearances in the back row for Munster in a playing career that spanned 13 years.

He made his debut in 1995 against Swansea in the province’s first match in the Heineken Cup – a competition in which he would later captain his side to victory in 2006, having twice finished as a runner-up (in 2000 and 2002).

His father, Brendan was part of the Munster team that famously defeated the All Blacks in 1978 while his sister, Rosie was also a member of the Irish women’s rugby squad.

Anthony also captained Ireland three times in winning 62 caps, having made a try-scoring debut in the Five Nations defeat by England in January 1995.
He was replaced as Munster captain by Paul O’Connell for the 2007-08 season, at the end of which he announced his retirement and joined their coaching staff.

He initially took over as Munster forwards coach in 2011 – a role he briefly undertook with Ireland during the 2012 Six Nations – before graduating to head coach in 2014 after the departure of Rob Penney.