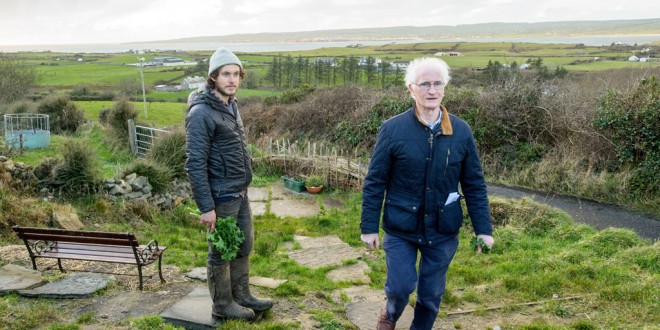 THE bitingly cool winter air swept across Moy on Monday evening, as the Get Involved 2015 Scheme’s judges visited Moy Hill Community Garden and a 17-acre farm located nearby, which was purchased five months ago.

The volunteers who run the community garden have made it to the last six in the Local Ireland-organised Get Involved awards project, which is a competition run by 51 local newspapers throughout the country.

The aim is that the national competition will drive voluntary sustainable projects, where local people collectively play a more proactive, inclusive and coherent role in shaping the future of their local environs.

Matt Smith, along with his partner Sophie, Fergal Smith and Mitch Corbett, are some of the people who helped establish the community garden before purchasing the 17 acres. The garden grows a huge variety of fruit and vegetables and for much of the year, people visit on Friday evenings to enjoy the social setting. It also features an underground glass house, which the group literally dug out the space for.

“We were running events here up until October 31. There are a lot of families around who don’t want to take their kids to the pub in the winter. There is not that much else to do that doesn’t cost money. It’s a space to meet, hang out and learn,” Matt explained.

“Originally it was Fergal, myself, Mitch Corbett and a few others. But really we’ve done very little here in the last eight months. It has been taken over by the community. We set it up, planted the first fruit trees and put the buildings in place. Since we bought the new 17 acres five months ago and got planning permission for the shed and glasshouse, we have let the community run the garden. There is no ownership. It is totally the community’s and it will be forever. That’s the most beautiful thing,” he reflected.

Inclusiveness is the key word. People don’t have to bring a particular skill to the group; just an interest in what is happening.

“You don’t have to be a gardener, a surfer, a mum or a dad. If you come here on a Friday there will be people from a wide range of society. It’s not one culture. It’s everything. In the 17 acres, we are going to grow on two of the best acres. We were feeding 50 people or more throughout the summer, on half an acre. We’re going to multiply that by four.
“The idea of Community Supported Agriculture (CSA) is that you don’t want to be feeding everyone. You need loads of these small farms,” he maintained.

The group filled boxes with vegetables grown in the community garden, which were sold for €10 in an initial pilot project.

They purchased the half acre garden two and a half years ago and were afforded a grant for a community orchard, which helped them to plant 60 fruit trees.

Television personality and environmentalist, Duncan Stewart, was one of the judges in Moy this week. He was visibly impressed by what he saw and heard.

“What I’m seeing here is young people coming together and creating something in this community, where a garden becomes a local centre for people to integrate and collaborate. It’s not just about growing food, there’s a wider dimension. It’s the start of a bottom-up movement I can see happening in this country, where people are realising they can do things by coming together, making things happen and using the resources locally. They are focusing on food, which is so critically important and obviously there is potential for local energy from this. The benefits are multiple and I see this being a good model of what could happen all across Clare and all across the country,” he told The Clare Champion.

“There is an energy and a great sense of belief in the future. It’s about getting up, getting on and doing it. Action on the ground, making it happen and realising that we can actually build resilience locally too.

“I think the potential is huge. We need to realise that, all over Ireland, there is land that is just under-utilised,” he maintained, adding that people can make a living from such ventures if they are interested in pursuing that path.

“There are such great opportunities here of turning it into viable livelihoods and benefiting the community with local produce. Bypassing supermarkets is a really important part of it. Five supermarket chains dominate our distribution of food in Ireland and 70% of our food is imported. We are very, very reliant of food coming through that centralised purchasing system of supermarkets. We need to find alternative routes to market. Farmers or people growing produce need to come together, collaborate and form small co-operatives. I can see a grassroots movement starting to happen and this is a really good example of it,” Duncan Stewart maintained.

Fergal Smith, who is also the Green Party’s General Election candidate in Clare, also revealed the group recently purchased an old creamery close to the 17-acre farm.
“The sale has only just gone through. The idea is that this is our CSA farm and the hub is going to be a place for vegetables to be dropped off but also for workshops and processing food. Potentially, maybe a café and other things like that,” he said of their new hub.

It was back in August when Fergal first spoke to The Clare Champion as part of the scheme and many of the plans he mentioned then have since come to pass.

“We don’t hang around. This project is going places and it’s great to have people really supporting it and getting on board,” he acknowledged.

“Three years ago, Local Ireland set up Get Involved. What we wanted to show to our own readers and to the country generally was the role that local newspapers give in terms of leading and demonstrating what is best in the community. We set up an awards scheme for the best community projects in the country. The newspaper is the catalyst. It identifies the projects and knows them from their reportage and supports them through the columns of the newspapers,” he explained.

Moy Hill Community Garden is one of six national projects shortlisted from an original entry of 29.

Get involved with Moy Hill Garden