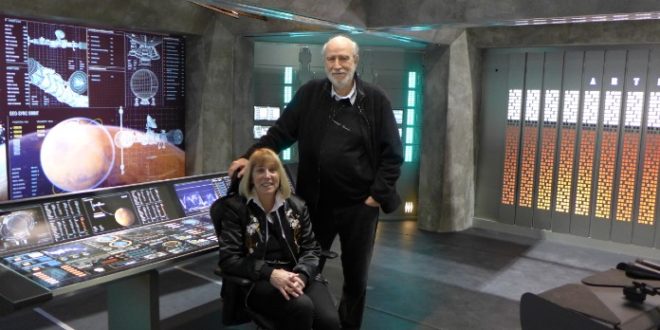 LOCKDOWN has been a creative time for a family of film-makers living in Mountshannon. Not only have father and son Terence and James Ryan been working on three projects – including one tipped to be shot in Clare – Terence’s wife Susan Morrall, a scientist and screen-writer, is also making PPE for Raheen Community Hospital.

The family, which also includes award-winning director Kit, have long links to East Clare. Terence and Susan have lived in Ireland for two decades and Terence’s father, who was from Clonlara but emigrated to England, came to live in Mountshannon for the final five years of his life. “Ireland was always home and we visited every year,” Terence, a director, writer and producer, said. “I grew up in South Kensington but came home to go to school in Tipperary and it was the best thing I could have done.”

The family will probably be best known for their award-winning production Property of the State, released in 2016, which detailed the impact of the murder by Brendan O’Donnell of Imelda Riney, her three-year-old son, Liam, and Fr Joe Walsh. Their entire catalogue is extensive, branching into television, documentary, historical drama and even science fiction. In fact, a recent production about an investigation into a failed mission to Mars, produced by James, with Terence as executive producer, has worked its way to the top of the Netflix ‘Most Watched’ list. “2036 Origin Unknown was released in 2018 and we struck the deal to make it available on Netflix this year.” explained James. “We made Number 1 in the Most Watched films in the UK and Number 3 in Ireland. We had a really nerve-racking production schedule. We shot the whole film in just ten days and couldn’t afford to go over that. The big break in that production was securing Katee Sackhoff of Battlestar Galactica to take the lead role.” While James admits that he was a fan of both Star Trek and Star Wars, he feels Sci Fi is continuing to push its way into the mainstream: “Katee Sackhoff is a huge star in Sci Fi and that has really helped the popularity of the film, but I think Sci Fi is a genre that’s gaining in popularity, especially during the lockdown. I really hope people will enjoy watching.”

While savouring the success of 2036 Origin Unknown, the family certainly haven’t been resting on their laurels. “I suppose what the lockdown has done is provided a bit of ‘us time’ as a family and as colleagues,” explained James. “We’re working on three productions, one in Scotland one that will involve work in Ireland and Germany and one that will be shot in Ireland.”

Currently, a big concern is how social distancing will be incorporated on set and the impact, on film and television making, of the public health guidelines. “The UK has just produced guidance for high-end television productions,” Terence noted, “but things will work slightly differently in different countries. We’re waiting for advice from Screen Ireland who are liaising with the government. Systems are being devised in other countries, so we’re hopeful we can start to get more clarity soon.”

Film and television producers are resourceful by nature and facing challenges comes with the territory. “I was making a film in Derry four years ago,” Terence recalled. “Because of the huge success of Game of Thrones, it was virtually impossible to hire experienced crew. Somehow, we managed, through some contacts, to put together a crew of 72. They had no experience at all, but it was one of the best teams I’ve worked with and they’ve all gone on now to other opportunities in the industry.”

Being sequestered in leafy Mountshannon has also given the family the chance to continue to lend their support to the community where they have made their home. “Susan is very much the driving force for us all,” explained Terence. “She’s a scientist, trained by the Imperial College, but now she’s turned her talents to screen writing, drawing and photography. Right now, she’s making gowns for Raheen Community Hospital. There are a lot of people involved in that.”

The details of the family’s forthcoming Clare-based project is still under wraps, but Terence is willing to divulge that the theme is “kind of historical”. “We are hoping to be able to reveal everything soon,” he said. “We’ve been working on the project for quite some time and filming in Clare will be very exciting for all of us.”

Fiona McGarry joined The Clare Champion as a reporter after a four-year stint as producer of Morning Focus on Clare FM. Prior to that she worked for various radio, print and online titles, including Newstalk, Maximum Media and The Tuam Herald. Fiona’s media career began in her native Mayo when she joined Midwest Radio. She is the maker of a number of radio documentaries, funded by the Broadcasting Authority of Ireland (BAI). She has also availed of the Simon Cumbers Media Fund to report on development issues supported by Irish Aid in Haiti. She won a Justice Media Award for a short radio series on the work of Bedford Row Project, which supports prisoners and families in the Mid-West. Fiona also teaches on the Journalism programmes at NUI Galway. If you have a story and would like to get in touch with Fiona you can email her at fmcgarry@clarechampion.ie or telephone 065 6864146.
Previous Golden opportunity to support business in Ennis
Next Greywater project a winner for Lisdoonvarna students