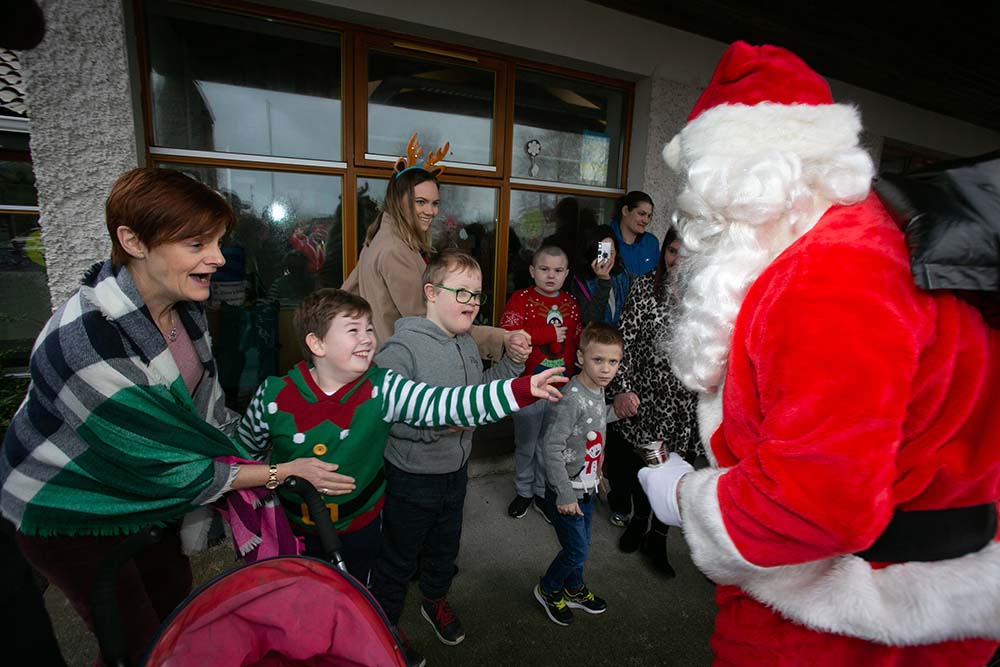 MEMBERS of the West Coast Motorcycle Club handed over the proceeds of their annual motorbike toy run in aid of St Clare’s Special needs school Ennis on Friday December 21.

The toy run was held on Sunday December 9 last and raised €2,460 for the school, a €1,000 increase on what was raised in previous years.

The bikers met up at Donellans Center on the Lahinch Road, where they all made a donation before heading down to Limerick via Newmarket on Fergus and Shannon.

On their toy run they stopped in Limerick city centre where they held a bucket collection for an hour before returning to Ennis.

While the bikers were in Limerick, some of the staff and school principal along with some parents of the children attending St Clare’s did their bucket collection around Ennis town.

When the bikers arrived back to the Height in Ennis, they joined up with the other who had been collecting around the town and there was great fun had by all.

On Friday last, Santa was ushered into the school on a motorbike to deliver the cheque for the funds raised and this will ensure pupils of the school can look forward to new equipment in the new year.

This is the fourth year the West Coast Motor Cycle Club has conducted this charity event and it is understood that the school is aiming to purchase 11 I-pads for the school.

John Murphy of the motorcycling club said the funds raised are up by about €1,000 and this is due to the effort put in by the school itself on the day.

He also revealed that when the club was formed in 1992 it gave a commitment to carry out charity fundraising and since then it has raised €100,000 for charities.

John also extended his gratitude on behalf of the club to everyone who helped out on the day and all who gave so generously to the bucket collections.

Carol Byrne is a reporter at The Clare Champion newspaper reporting on news in the East Clare area and the arts. She also covers the courts in County Clare and has received seven national awards for this coverage from the Law Society of Ireland and a National Lottery Local Ireland national media award for Best Community Story 2019. A Masters in Journalism graduate of NUI Galway, she also holds a Bachelor of Arts from the University of Limerick in Music and Media Studies, and a Higher Diploma in Irish Legal Studies. She began her career interning at The Limerick Leader and Clare FM, before taking up a full time post at The Clare Champion in 2006.
@@Carlsburn
Previous Clare Sweating On A Number Of Key Players Ahead Of 2019 Hurling Season
Next Guilfoyle’s Goal Sparks Banner Comeback In Munster Hurling League Win Over Cork