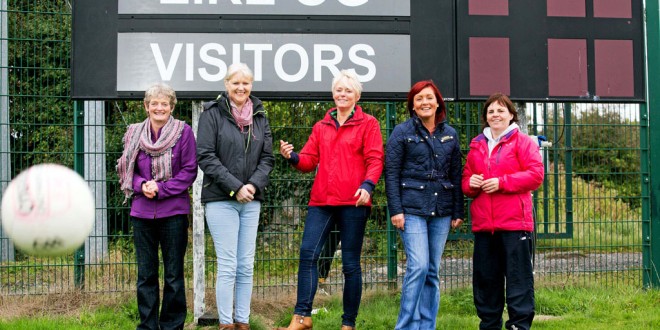 Motherly tension in Éire Óg ahead of county final

TENSION: Sunday’s county final will feature plenty of it. Much of it will emanate from players and management but amongst those feeling the heat most will be the parents.

Some sit and watch quietly. Others sit but struggle to keep a lid on it. Step forward Trisha Ryan, mother of Éire Óg defender, Dean and one of five Éire Óg mothers The Clare Champion battled to get a word in edgeways with last weekend.

Such is her fervour, she sometimes gets into rows she doesn’t even recall being involved in. An opposition handbag bounced off her after Éire Óg’s semi-final win over Kilmurry-Ibrickane.

“People told me afterwards that someone hit me with a handbag on the way out but I was so happy that Éire Óg won, I never felt anything,” she recalled.

A former footballer and camogie player herself, Trisha is not slow in offering advice from the stand.

“From playing myself, I’d be saying ‘get back and mark your player’ or something like that. Some players would come back after and would say it was great to hear someone from the stand giving them a bit of instructions. When you have played yourself, you know what it’s like to be out there and you know how hard they are working. If they do make a mistake, you feel like roaring and shouting at them but it’s very hard when you’re out there and you hear the criticism,” she feels.

Trisha is certain that her son must have listened to her at some stage given that, like his mother, he is a corner or wing-back.

“It’s just amazing that he plays in the same positions as me on the field. I’d criticise him as much as I praise him. He’d go ‘I know, I know, I know’. I wouldn’t be always praising him. I’m fairly vocal as everyone knows. I’ve been told that I’m like a second referee in the stand,” she admitted but insists she has no intention of piping down.

A mother’s greatest fear is to see her son getting injured. Frances O’Neill, mother of Darren, had an unsettling experience last year when her midfielder son broke his collarbone in the championship quarter-final. Ironically, Frances was sick and not at the game in Kilmihil.
“I was so sick I couldn’t even travel to the hospital. It was just so frightening because they didn’t know what was wrong with him. They thought it was a lot more serious,” Frances remembers.

“Frances texted me asking how was the match going. At that stage, Darren was on the flat of his back on the field and I couldn’t text her back,” Trisha Ryan revealed.

On match day morning, Frances, who is from Corofin, says her son is, generally, fairly relaxed. “He gets up and eats and eats and eats,” she laughed. “He’d be quite calm. My biggest worry would be that they’d come off the pitch safe and healthy. Most of my friends now would be through Darren, sport and matches. It’s a fantastic community.”

As much as she enjoys the game as it unfolds, Frances equally enjoys the craic in the stand. “You have to sit beside Trisha Ryan when you’re at a match because it’s all part of the enjoyment. She knows her stuff. She knows what’s right and what’s wrong, whereas I wouldn’t be that well up on the rules. But once I know Trisha is right, I can shout away beside her,” she smiled.

Anne Corry is mother of corner-back Liam. Her son doesn’t eat just anything. Diet is now a central part of any serious GAA player’s routine. “He’d be very specific about what he eats. He’s all into the healthy stuff and I suppose being part of the Clare U-21 hurling and football panel has really emphasised that. He would be good at eating regularly and getting his sleep.”

Her husband, Tom, is from Cranny, while Anne is a native of Kildysart. Three Corrys, Kevin, Paudie and Joe, are Liam’s first cousins and will be part of Coolmeen’s junior A final panel on Sunday, in the county final curtain raiser. Come 3.30pm, however, it is likely that Liam Corry will be shadowing Podge Collins.

“It’s a very hard task. With Podge and the speed it’s hard and the other side of it is, they’re friends off the field. We’d be more nervous when he is man-marking as they call it. Hopefully, he’ll do his best. That’s all we expect of anyone of them,” Anne surmised.

She loves the fact that her sons are so orientated towards sport. “It has changed our lives because we have got to know so many people through sport, from the time that both Kieran and Liam started hurling and football. Most of the people we know now are through sport. You’re so proud to see them playing and partaking in it. It’s lovely to be part of the team. When Liam went from minor up to senior, the senior players really looked after him and the younger ones really looked up to them. There seems to be a great bond there between them,” Anne has discovered.

Bernie Glynn, mother of full-forward Graham, is from Lissycasey and grew up steeped in GAA.

“Growing up my two brothers, Michael and Tony McMahon, played. We basically went to mass and we played football. My brother Patrick is Podge McMahon’s father and the Finnucanes in Lissycasey are my cousins as well. There’s good blood there,” she laughed.

Graham is fairly relaxed on and off the field. Bernie isn’t quite so laid back. “Coolness personified,” is how Bernie describes her son on the day of a match.

“I wouldn’t be cool. I’m a bag of nerves. Good job I’m not playing. We’re just two different people and we do things in different ways. He doesn’t listen to me half the time anyway,” she noted.
Growing up Graham played more or less day and night. If there was a game of any sort on, he was there.

“He did everything, football, hurling or soccer, he had to be there. I remember once he had nine competitive games in one week. The day of an U-14 county final, I brought him back to Kilrush to play half a game with Avenue United because we couldn’t let anybody down. We’ve met fabulous people along the way. All of those boys, we know them since they were 12. I could definitely write a book about different experiences and they’re all good,” Bernie recounted.
Originally from Castleblayney in Monaghan, how did Catherine Russell, mother of Ciarán, end up in Ennis?

“It’s a long story. A man brought me here and it had a very happy ending,” Catherine said laughing uproariously. That man is her husband, Tom.
“He played for Castleblayney Faughs so that’s where Ciarán gets his football. His dad was a great full-back. I have to give it to him. He took the football from his father but he took the speed from his mother. I have to give myself credit for something,” she grinned.

This time last year, Ciarán had to undergo surgery on his bowel. Naturally, it was a very worrying time for his parents.

“He lost three stone in a week. He was in hospital when Éire Óg were playing. He came out and he was only out of hospital when the Clare football manager rang him. He explained his case but they said they’d hold out for him. Fair play to Colm Collins, he did a great job on him. He brought Ciaran back to full fitness and I think Ciarán had a very good year. I’d say he’ll get a lot better because when he goes back again, he’ll be starting from November whereas last year he didn’t start until February,” his proud mother said.

In an ironic twist, Catherine feels Ciarán’s health issue last year was a turning point in his sporting career.

Not sounding at all nervous when in full flow, Catherine insists that she is a different woman when watching her son play. “I’d be very, very nervous on the day of a match. I just can’t take it at all. I’d be just hoping that he does okay and keeps his mouth closed. He’s well able to talk and well able to run in when there’s a little tiff going on. No problem, Ciarán Russell is always there. He certainly didn’t get that from his mother!”

Come Sunday, many of the Éire Óg mothers will be seated side-by-side as their sons go in search of county final glory. They’ll be depending on Trisha Ryan for time-keeping. Along with fully functioning vocal chords, Trisha is never seen at an Éire Óg match without her stopwatch.
“I’ll have it again next Sunday and, hopefully, when the stopwatch stops, we’ll be leading,” she said, displaying a rather steely countenance.