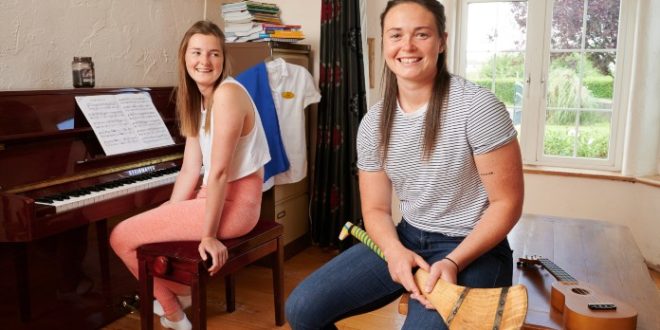 Clare Camogie All Star Chloe Morey with her sister & trainee nurse Melissa at their home. Pic by John Kelly

CHLOE Morey has come through plenty battles during an inter-county camogie career that stretches back over a decade.

The Sixmilebridge woman has been a central part of the Clare senior side since making her breakthrough but this year she opted to take a step back to refocus on solving some long standing injuries. She was not to know when she made that call that she would miss out on very little action as Covid-19 brought sport to a halt, but the virus is something that has impacted much closer to home than that.

“It has been tough but that seems odd for me to be saying as a teacher because both my mother and sister are nurses. I have heard all the stories from them firsthand and it really emphasises how important it is to abide by the guidelines. Everyone has had to adapt and I have been teaching online and it is really hard for our students. We are lucky in that sense that our students in St Caimin’s are really driven but it is tough on them. I was taking a break from playing camogie with Clare this year and as it turns out, I probably picked a good year to do that” she smiled.

When the Covid-19 outbreak began, the spotlight fell on the frontline workers who would be charged with battling the virus. For the Morey household, it meant that two of them would be in close contact with Covid-19 on a daily basis. Chloe says everyone is working together to give as much support to them as they can.

“Melissa has to abide by all the standards so when she gets home, she has to go for a shower and wash her clothes straight away and then we disinfect everything that she has come into contact with. Some people might ask why she did not move out from home during this but it is not like we have an abundance of houses to choose from and that is not something they are looking at providing at the moment either. She is a Fourth Year student in UL so even her pay and conditions is something that really needs to be looked at. I am all in favour of the claps for frontline workers and those initiatives but there has to be a lot more done for nurses in this country when things calm down a bit. She is staying positive and abiding by all the standards as best as she can. As a family, we are doing what we can to support here so I find myself cooking a lot more than I thought I would have to in order to get on her good side. My mother works in Milford Hospice so she has a tough job dealing with that also. I am lucky really to have two brillant frontline workers in the family who are doing so much for the country at the moment” she noted.

Chloe says the manner in which everyone has faced down this virus has been hugely encouraging, while recent charitable efforts in particular have been heart warming to see.

“Melissa is taking it in her stride and sometimes when she is telling stories I am just sitting there in shock. I am yet to meet a nurse who is giving out and I really mean that. Some of my best friends are nurses and you have the likes of Orlaith Duggan involved in the testing centres and there is not a bad word from any of them. They just get on with what they have to do and I really think that as a country, Ireland is brilliant for just showing support for each other in times like this. Melissa has been getting letters of support and things to help her with the job and it is just such an Irish thing in how we all row in with each other. You can see that also on social media with all the fundraising that is going on and there really is no other country in the world where people support each other as much as we do here. It is really what is driving some people through this and it is really nice to see. People have lost their jobs and had their worlds turned upside down but yet they have no problem with donating what they can for good causes. It is amazing and it is a uniquely Irish thing. It really is a ray of happiness in dark times” she observed.

She may have still been teaching her St Caimin’s students online over the last few weeks, but there was still time for Chloe to explore ways in which to expand her list of talents.

“I have taken up a musical instrument to try and keep my mind ticking over. I took up the ukulele and it is not going very well but I am trying all the same. I was reliably informed that it was one of the easier ones to learn and it was a cheaper instrument. It is going below average but I am persevering. It is nice to do something totally different when you get a chance like this so I am enjoying it. I was researching things to be doing outside of sport and heard that learning a musical instrument is quite good for you to keep you ticking over mentally. That being said, I would not recommend that anyone comes to me for ukulele advice. I have only a few chords but no song learned at the moment. I am trying to learn ‘You Are My Sunshine’ but it is proving difficult even though I have gone through a lot of YouTube tutorials. Melissa is the musician in the house because she is a Grade Eight piano player so for her to have to listen to me trying to play the ukulele after coming home from a 12 hour nursing shift probably isn’t the best. She is very supportive though of my music career” she laughed.

2020 was the year in which the former All-Star decided to give the Star Spangled bandana a break from inter-county duty as she opted to take a year out. She is not ruling out a return in the future but says she felt it was the right decision to take that step back.

“I am very driven and motivated and I don’t like when I play poorly. People would be telling you that you are not going badly but you know yourself when you are not playing well enough. When you put on a Clare jersey, you have to be at the top of your game and that you do everything you can. I think last year, as much as I was trying, there was a part of me that just was not enjoying it. You cannot go and play for Clare like that because you are doing a disservice to people who had the jersey before you and also to those who want to wear it. I thought it was the best decision but I did find it quite hard. I was going to all the league games and it was difficult because it was almost like a taste of what is to come when I do retire and have a life without camogie. People will tell you it is only a game but it is something I have been doing since I was 15 and it is my life between November and September of any given year. I am so delighted that I have had that and I have no regrets about any of it because if you are lucky enough to be able to play you should always put yourself forward. I just felt this year that I would be doing a disservice to everyone and when all this is over, I would like to be able to say I gave everything I could to Clare and that I took the year of a break to get the body and head right. I could do no more then. If I get that chance again, then hopefully I will be fresh and ready to make the most of it” she concluded.