Home » Lifestyle » To the Moon and Back 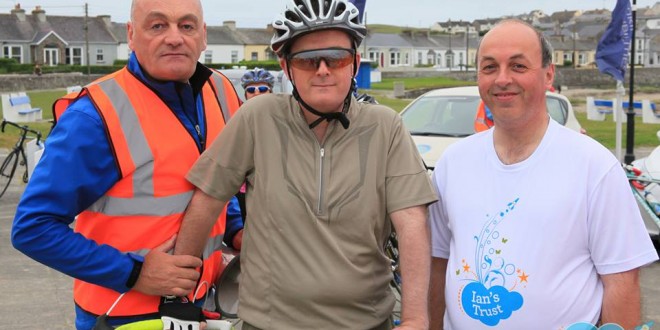 John Cusack, Ian's father and organiser of the Ian's Trust To The Moon and Back cycle and run at Kilkee last Saturday, John Galvin, The Clare Champion and Gerry O'Brien, Hyundai Limerick (sponsors) awaiting the start of the 60 km cycle to Loop Head and back in aid of children with acquired brain injuries. Pic Munsterimages.ie

To the Moon and Back

I agreed to do the cycle before I even thought it through. A 60km cycle less than two weeks away was going to be a tall order, given that I haven’t done much on a bike for years. The To the Moon and Back cycle was in aid of Ian’s Trust, a charity set up to help children with acquired brain injuries, so I felt honour bound to give it a go.

In the intervening fortnight, I managed to do a few 10km runs but I felt in no way properly prepared when I lined out in Kilkee last Saturday for the jaunt to Loop Head and back.

I didn’t feel any better when I saw what surrounded me. Lycra-clad bodies on carbon fibre bikes were everywhere and I felt distinctly out of place on my vintage, 20 year old Raleigh racer, with its steel frame and only 12 gears.

The day was dry and fortunately, not too warm. The only downside was a stiff wind that was coming against us as we set off from the seafront at Kilkee.

The route climbed out of the town up a long hill and between the incline and the wind, ten minutes in, I wished I’d never started. Then, a strange thing happened. My muscles warmed up and I was raring to go. My legs from that point on never came close to letting me down.

I set a pace for myself that I could comfortably maintain and let the fast boys and girls do their thing out in front. Although I wasn’t among the pacesetters, I wasn’t the slowest either, although as I reached the half-way point at Loop Head, the lead peloton were already heading back on their second leg.

I was never so glad to get my first glimpse of Loop Head lighthouse but until you approach it on a bike, you don’t realise that there’s a long hill leading up to it and by the time I reached the top, I was in desperate need of the sandwich and fruit cake being doled out by heaven-sent volunteers.

After the bit of food, I was in rare form to tackle the home stretch and the lovely thing about the slog up the hill to the lighthouse was the run down from it and it seemed like I was nearly half way to Kilkee before I had to touch the pedals again.

There were still a few climbs to tackle but with the wind now at my back and the feeling that I was on my way home, the second half of the cycle was a joy, the only glitch being when my chain fell off, which was the only time I had to stop.

There were some vicious cross winds to deal with too on the cliff-top run down into Kilkee. They got so bad that even though I was in the wrong gear, I couldn’t take my hand off the handlebars for fear of being blown into a ditch.

Even though I really enjoyed the cycle, I was never so glad to see Kilkee at the end. I cruised along the sea front towards the finish, where the finishing medals were being handed out.

The guy took a long look at my bike and asked “Are you with us?” “Well, I’m not in a cycling club.” I replied.

“No, were you on the run?” “Of course.” He took another long look at my bike and handed me my medal, saying “You really deserve this.” I think he was insulting my bike.

I got the last laugh though, as everyone crowded around to get a look at my classic bike in the same way that car nuts would crowd around a nice, old car.

Nobody could believe how heavy my bike was – a whole 12 kilos versus the 8 kilos of the best modern bikes. Someone suggested that changing the wheels would knock off a bit of weight but we all agreed it would spoil the looks. I’m keeping it original.

It was a great event, very well run and in aid of a great cause. I think I’ll be back next year. With a bit more training I might be able to give those modern bikes a proper run for their money.