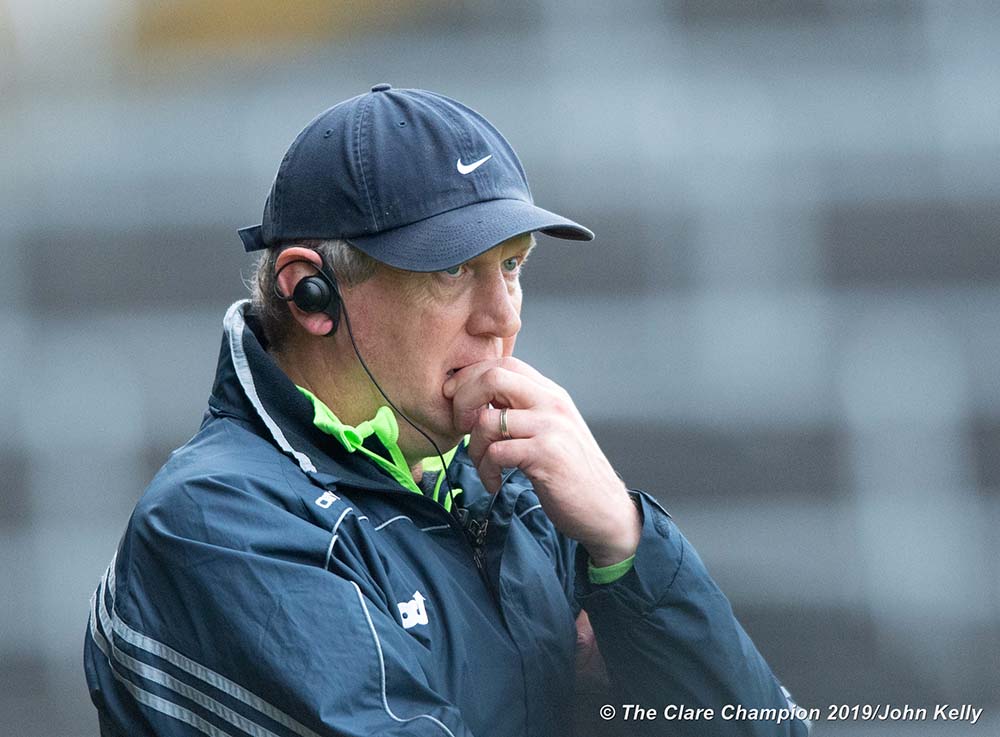 Donal Moloney, Clare Joint Manager, on the sideline during the Munster Hurling League final at The Gaelic Grounds. Photograph by John Kelly.

Clare resume their National Hurling League campaign this Saturday evening when they travel to Pairc ui Rinn to take on Cork with a 7.15pm start.

The Banner come into the game off the back of an impressive win over Kilkenny last time out, while the Rebels will be smarting after losing out to Wexford and Kilkenny in the opening two rounds.

“This break in the league has probably been welcome because it precedes the three games on the trot that are coming up against Cork, Wexford and Limerick. It’s a chance for people to draw breath because it’s an incredibly competitive league irrespective of the forthcoming structures. It’s ferociously competitive as we have seen in the first few rounds. I think every team has really gone after raising their level of performance because the reality is, this is the primary preparation for championship and the round-robin series that kicks off in the middle of May, so the level of intensity that teams are bringing is no real surprise. I said from the outset that I felt the new structures would have no bearing on how people treated the league. It’s as competitive as ever, maybe even more so as we have seen already in the Tipperary and Kilkenny games to date” he noted.

Clare responded well to a disappointing opening night in Thurles with a brilliant performance against Kilkenny in Cusack Park to get their campaign up and running. Moloney is confident they will have taken plenty learning points from both performances.

He said: “I think Tipperary were well up for the game in Thurles and had a bit more bite to them on that night. That’s going to happen in the league. No team is going to produce a compelling performance across all five games. We were a little slow out of the blocks that night after having a very good Munster League, and Tipperary probably found a little more motivation from that game than we did and performed accordingly. Against Kilkenny then, we produced a much consistent performance and to a much higher level and the lads prepared really well for that”.

Clare made six changes the last day out for that clash with the Cats, but will have talisman Tony Kelly available once more on Saturday evening as he returns from suspension. In a further boost, it’s understood Seadna Morey is back with the squad having returned from travelling, while Pat O’Connor, Oisin O’Brien and Paul Flanagan have left the treatment table.

Clare and Cork have plenty history over the last few years, and Moloney is expecting another tough test.

“We have had significant challenges with Cork and from a championship perspective they have gotten the better of us in the last two Munster finals. That’s something we are very focused on looking ahead to the summer. Cork were able to raise their game at critical points in both of those Munster finals and in last year’s round-robin too. They have a lot of capability and some very experienced leaders in their squad. They would consider themselves unlucky not to have been in the last two All-Ireland finals and maybe it was more self-inflicted than opposition inflicted in terms of what happened in both semi-finals. They would consider themselves to be a top team and they are a formidable opponent” he said.

Clare have two home games to look forward to after Saturday night’s tie, with Davy Fitzgerald’s Wexford and All-Ireland champions Limerick set to visit Cusack Park over the next few weeks. Victory in Pairc ui Rinn could set Clare up for a place in the quarter-finals, but Moloney is warning they can’t look past the challenge that’s ahead of them this weekend.

He said: “It’s dog eat dog at the moment. If you look at the first round, Tipperary were probably feeling good about themselves, so were Kilkenny, and now you have Limerick on top and a group of teams on two points then. Any team can take the other on a given day and Wexford proved that the last day by going into Pairc ui Chaoimh and winning. It’s hugely competitive and our focus on Saturday night will very much be based around delivering a more consistent performance. We had some good spells against Kilkenny but we lapsed at times too, and we have been really going after improving on those. Some of the defensive work the team did the last day was really positive but at times we did go over the edge and committed some fouls, so we need to focus on reducing the free count. On the other hand, we have always had the capability to put some great moves together. That reflects their ability and the way they like to play the game. When they do that, it’s really good to look at but the challenge is to do it more consistently. We have had some good moves where we have had the ball turned over and scores conceded so it about trying to build more consistency from that point of view”.