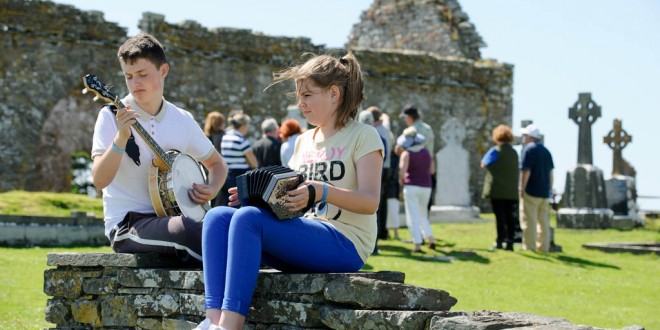 Members of Kilrush Comhaltas Diarmuid Donnellan and Tara O' Malley playing during a trip to Scattery Island as part of the Kilrush Traditional Music and Set dancing Festival. Photograph by John Kelly.

ORGANISERS of last weekend’s Kilrush Traditional Music and Set Dancing Festival are baffled at the removal of promotional signs prior to the annual event, which attracted hundreds of overseas visitors to the town.m

Kilrush Comhaltas committee members have searched around the town but, as yet, have not found their signs. Bizarrely they feel their best hope of becoming reacquainted with their signs is if the culprits erect them in the aftermath of the festival.

“We’re expecting they probably will put them up now, once the festival is over. That was done before one year. They took down the signs two weeks before the festival and then put them back up when everything was over,” a bemused festival secretary, Anne Hayes, revealed.
Organisers initially thought that either Kilrush Tidy Towns or Clare County Council may have taken down their signs but it has emerged that this is not the case.

“We have permission from the county council in Ennis. Murt Collins (Kilrush Tidy Towns) said that they didn’t remove them either,” Ms Hayes explained.

Kilrush gardaí have been informed and Ms Hayes is hoping that the signs will be returned.

“If anybody has any idea where the signs are, maybe they might return them. To make it worse, we bought new ones this year. We went around the town and looked in across walls and everything but we didn’t get them yet. When you’re trying to promote something, this type of thing doesn’t help. It hasn’t happened with a couple of years but it has happened before,” she sighed.

Not surprisingly, the committee is rather frustrated at this turn of events.

“It’s maddening. I know lads do it for election. They take down the signs and put them up a couple of weeks after the election to get the politician into trouble,” she said, adding that the motive behind the festival sign removal was unclear.