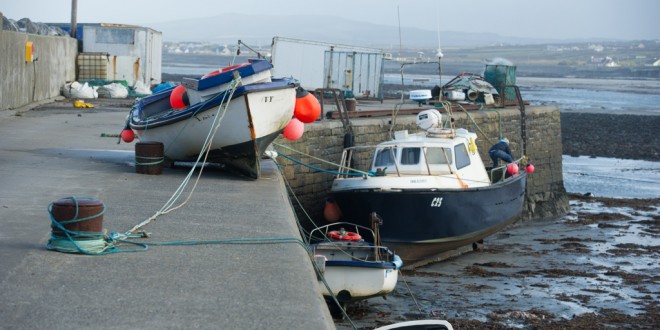 AN APPEAL has been made for greater support for what remains of Clare’s fishing industry. Figures seen by The Champion show the total value of fish landed at ports in Clare last year was worth just over €350,000. That accounts for around 0.1% of the national total of fish landings which came to more than €282 million.

Councillor Cillian Murphy from Kilkee, who spent much of his working life in the fishing industry, said the data was an indictment of the policies of various governments since the 1970s.

“The reality is that a decision was made to sacrifice fishing for farming and this has been the approach for decades,” the Fianna Fáil member said. “What’s happening now is that most of the fish landed is fired into the back of a truck and exported. Fishermen are only getting a commodity price. Jobs and income are being sent out of communities.”

On foot of the Clare figures, which show that Quilty had the highest value of landings and Ballyvaughan the lowest in 2019, Councillor Murphy queried Bord Iascaigh Mhara (BIM) on the amount of the national catch which is processed in Ireland.

Reacting to the response from BIM, who said, “The question you posed is one of the more difficult questions to answer. There are many variables which impact on this including target species, landing area, access to markets, demand, quality, species price etc,” Councillor Murphy said his own sense that the figure was as low as 8-9%. “There’s a huge missed opportunity there,” he remarked. “Outside of Clare, in the big ports like Kerry, Galway and Cork, one of the biggest issues is the large Spanish and French operators. The fish doesn’t even hit the pier. A truck comes from Spain with all of the provisions for the boat. That’s off loaded, the fish is loaded and the only local benefit is the harbour fees.”

Councillor Murphy, who has raised the need for better services at ports in Clare with the local authority, plans to put proposals to the council’s economic directorate to explore what can be done to capitalise on the potential of the fishing sector.

“We have amazing assets on our front doors, but we fair utterly to reap the rewards,” Councillor Murphy told The Marine Institute. “It’s only when you stick the numbers in front of people that we can really start to understand how much we lose.”

Fiona McGarry joined The Clare Champion as a reporter after a four-year stint as producer of Morning Focus on Clare FM. Prior to that she worked for various radio, print and online titles, including Newstalk, Maximum Media and The Tuam Herald. Fiona’s media career began in her native Mayo when she joined Midwest Radio. She is the maker of a number of radio documentaries, funded by the Broadcasting Authority of Ireland (BAI). She has also availed of the Simon Cumbers Media Fund to report on development issues supported by Irish Aid in Haiti. She won a Justice Media Award for a short radio series on the work of Bedford Row Project, which supports prisoners and families in the Mid-West. Fiona also teaches on the Journalism programmes at NUI Galway. If you have a story and would like to get in touch with Fiona you can email her at fmcgarry@clarechampion.ie or telephone 065 6864146.
Previous New Ballynacally café at heart of the community
Next Huge Numbers Changing Colours For CF