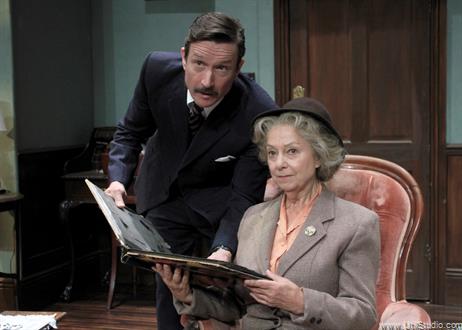 UK based Middle Ground Theatre Company Ltd is bringing the Agatha Christie classic A Murderer is Announced to the Lime Tree Theatre in Limerick this September 30 for four performances.
The production features a stellar line-up, with Sarah Thomas (Last Of The Summer Wine) playing Miss Marple, and other cast members include: Kazia Pelka (Heartbeat/World’s End/Family Affairs); Tom Butcher (The Bill/Doctors); Jenny Funnell (As Time Goes By), Lucy Evans (Coronation Street) and Tom Gibbons (Johnny Phillips in The Archers).
The Miss Marple mystery will be performed nightly at 8pm from Monday September 30 to Wednesday October 2, with one matinee performance at 2.30pm on the Wednesday.
The Agatha Christie novel has been adapted for the stage by Leslie Darbon, and is directed and designed by Michael Lunney.
The residents of Chipping Cleghorn are astonished to read an advert in the local newspaper that a murder will take place at the home of Letitia Blacklock.
In an interview with The Clare Champion, the play’s leading lady, Sarah Thomas outlines what audiences can expect.
“There is an announcement in the paper to say that a murder is going to take place at Little Paddocks at 6.30pm on Friday the 13th and all the nosey neighbours from the village turn up. The lights go out, there are gun shots and the mystery continues from there,” she said.
Miss Marple is among those who assemble at the house and she uses her unique skills to unravel a complex series of relationships and events to ultimately solve the mystery of the killer.
Those familiar with the novel and the television dramatisation may already have an idea of who that might be but Sarah says since touring the production fans of Agatha Christie are enjoying to stage adaptation.
“I know its been on television and we have had quite a few audiences already where either they have forgotten or they don’t seem to realise who it is until towards the end which is really good,” she said.
Sarah said she is really enjoying playing Miss Marple and the reaction to the production has been really positive both in Ireland and in the UK.
“She [Miss Marple] comes across as a very harmless older lady but as we know she notices things, that sometimes the inspector misses and she is able to link all the clues together. Because she is older and quiet people don’t think that she is as useful as she is. She has a reputation for solving mysteries, she’s quiet but astute,” she said.
The production is set in the living room of Little Paddocks and is set in 1951.
Sarah explained that there is a large cast of ten actors. “Seven are women and five are men, which is a nice change for the ladies,” she said.
Sarah has never been to Limerick and the Mid West before and said she is really looking forward to being down here for the few days and to explore what it has to offer.
She added that the production isn’t just for Agatha Christie fans, and that it has wide appeal with younger people enjoying it as much as older audiences who would have grown up with Miss Marple mysteries.
The stage production is now in its fourth year of touring and is brought to Limerick by the company who produced the critically acclaimed courtroom thriller The Verdict.
More information about the production, including booking details is available from The Lime Tree Theatre directly or online.

Carol Byrne is a reporter at The Clare Champion newspaper reporting on news in the East Clare area and the arts. She also covers the courts in County Clare and has received seven national awards for this coverage from the Law Society of Ireland and a National Lottery Local Ireland national media award for Best Community Story 2019. A Masters in Journalism graduate of NUI Galway, she also holds a Bachelor of Arts from the University of Limerick in Music and Media Studies, and a Higher Diploma in Irish Legal Studies. She began her career interning at The Limerick Leader and Clare FM, before taking up a full time post at The Clare Champion in 2006.
@@Carlsburn
Previous Kate joins Carey Corbett team
Next Champion Sports Chat Podcast Tuesday September 24th 2019

A pioneer in education – the late Professor Peadar Cremin

From Broadway to the Banner