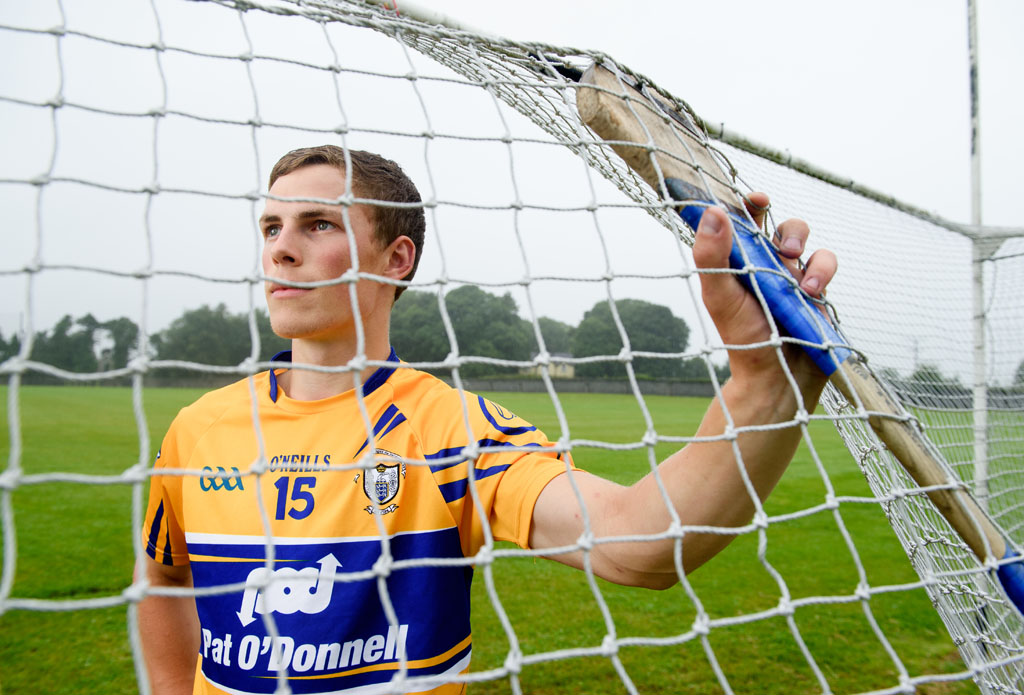 Gary Cooney, who will be hoping to hit the net on the big day. Photograph by John Kelly.

WHEN Cork stripped their great rivals, Tipperary, of the Munster Minor Hurling Championship title in a semi-final replay at Pairc Uí Rinn on Monday evening, it installed the Leesiders as favourites for Sunday’s final clash with Clare at Semple Stadium.

Clare’s progress to the final has surprised some, as their semi-final opponents, Limerick, were fancied to make it a fifth successive provincial final appearance, given that they had a fair scattering of last year’s squad that contested the All-Ireland final in their ranks.

However, Clare’s greater hunger for victory proved decisive in last week’s clash and they emerged as deserving winners in a tie that required extra time.

The fact the Cork v Tipperary tie was still level after extra-time, which led to Monday’s replay, confirms the view held by the Clare management that the four semi-finalists were evenly matched and that there will not be much between the teams on Sunday.

In the drawn tie, Brian Turnbull and Daire Connery were key figures in the Cork team. They were again very much to the fore in the replay.
Connery lined out at midfield, with Turnbull at corner-forward and between them on Monday, they hit 14 points, two less than their combined tally four days earlier.

Centre-forward Craig Hanafin hit 1-4 in Monday’s replay, all of which suggests that the Clare defence will have to be very vigilant on Sunday.

Clare will not name their starting line-up until later this week but it is likely to be along the lines of that which started against Limerick.

Team captain Cian McInerney is pressing strongly for a starting spot in defence this week, after he was omitted for the semi-final. He did come in for the closing period.

The half-back line of Diarmuid Ryan, Cian Minogue and Aidan McCarthy, which was outstanding last week, is expected to continue and the performance of this trio will have a big part to play in the outcome. If they can manage to exert the same dominance as in the earlier rounds, then Clare will have a great chance of bringing home this title for the first time in seven years and for only the fifth time in their history.
Another player who excelled on the way to this final is Keith White. If the Inagh-Kilnamona teenager can repeat that form, it will place Clare in a strong position. He will line-out at midfield, an area in which Cork are strong.

Going on semi-final form, there is concern over the number of missed chances. Over the 80 minutes, Clare had 22 wides and a repeat of that is likely to prove costly. Three of the starting forwards in that game failed to get on the scoresheet.

There may be a change or two in the starting formation in this sector, with Conor Tierney, Gearóid Cahill and Colin Haugh pressing for starting places, having done well when they were introduced last week.

The fact that Cork have had two tough semi-final games in four days may have an impact on Sunday, but before a ball was ever hit in this year’s campaign, the Leesiders were installed as favourites for the title, as this group has dominated underage hurling in the province over the past three years.

With the same counties through to contest the senior final, the minors can expect to be playing in front of a bigger than usual crowd. Going on the demand for match tickets, a near capacity crowd is expected at Thurles for what is a major day on the hurling calendar.

Can Clare win? They have shown that they have the ability and the determination to succeed. They will have to improve on converting chances and if they can manage this, then they stand a great chance of causing an upset.