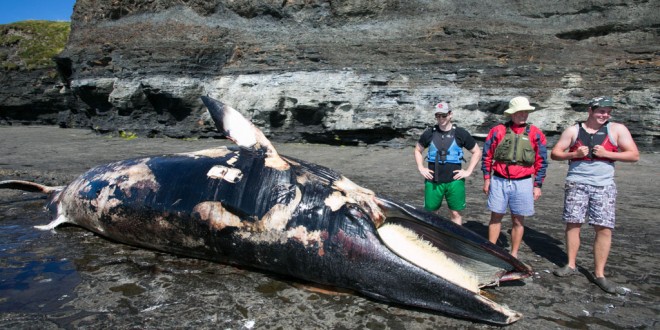 Onlookers at the washed up minke whale

A whale that washed up on the North Clare coast last week will be left for “nature to take its course”, Clare County Council has confirmed.
The body of the 6m-long adult female minke whale washed up on the Liscannor shore on Wednesday last.
“In terms of disposal, that would normally fall under the local authority. This whale would be difficult to recover because it is a stony beach so you can’t bury it and it would be hard to bring it out.
“It is not near houses and it is not on a popular beach so it is not a health hazard but we would still advise people not to touch it. It is expensive to recover whales and take them to an incinerator so we would see it as a waste of resources when it is not posing a risk,” Simon Berrow, chief science officer of the Irish Whale and Dolphin Group said (IWDG).
According to the local authority, “The whale is inaccessible and therefore the council is unable to remove it using the type of heavy machinery required, for example, tracked excavator. It is not practicable to dispose of the animal in-situ either, as the window of opportunity is very limited as high tide covers the animal.”
The local authority liaised with the IWDG, who the council said “have no specific requirement to have the animal removed and are satisfied to let nature take its course through natural decomposition and/or tide action. The council has not received any calls to either the Ennistymon or Kilrush office regarding the whale and does not believe it is causing any nuisance.”
According to Mr Berrow, minke whales are common in Irish waters but because of their size, they can be “elusive”.
“Minke whales are very common; they tend to be in inshore waters between May and October and then they disappear in October but we don’t know where they go. They go somewhere to breed and we don’t see them. In the summer, you can spot them off shore quite easily but tracking them is another matter. They are elusive. A big whale has a big blow and you can see it quite clearly but the minke is small so it doesn’t and if the sea is rough at all, it is very difficult to spot them. They are the most abundant of the baleen whale. Small whales have teeth but big whales have baleen plates and the minke is the smallest of the baleen whales,” he said.
The IWDG recorded the stranding at Liscannor and took a sample for the genetic tissue bank it operates with the Natural History Museum in Dublin.
“There would be 130 to 150 stranding events around Ireland in any given year. Every year about four or five minke whales wash up on the Irish coast, usually in the west and south and in Clare we probably get one every year,” he explained.
“Our obligation is to record the strandings. We note the species, whether it is male or female, the length and we usually take a skin sample because we have a genetic tissue bank with the Natural History Museum. There are lots of things you can find out about the life of a whale from a carcass but when you take a small sample, you can keep about 500 or 600 of them in an ordinary kitchen freezer,” he added. At the end of the year, the records are analysed and trends identified.
Members of the public will have a chance to see live minke whales if conditions are right on All-Ireland Whale Watch Day this Sunday. People can take part in the IWDG’s Whale Watch Ireland 2015 events from 2pm at Loop Head and Blackhead.
“I will be leading the one at Loop Head and people can just come along from 2pm. This is a land-based activity and if the sea is calm, I would think we will have a good chance to see minke whales,” he concluded.